After Holy Week and Good Friday processions in Athens, Rob and I flew to Corfu on Saturday morning. Aegean Airlines is always so nice about giving you candy, drinks and snacks on their short flights. For this jaunt to Corfu they also gave us clay pots and candles!

The clay pots are traditionally filled with water and smashed into the fireplace to ban “bad spirits” from your home. And in Corfu…they throw them from the balconies in a rain of terra cotta. Our flight landed just before 10 am. Quick taxi to our hotel and straight to the center of Corfu Town for the 11:00 pottery throwing. We managed to find a perfect spot in the heart of town to watch. Red flags were hung from the windows and pots prepared by filling with water and flowers. 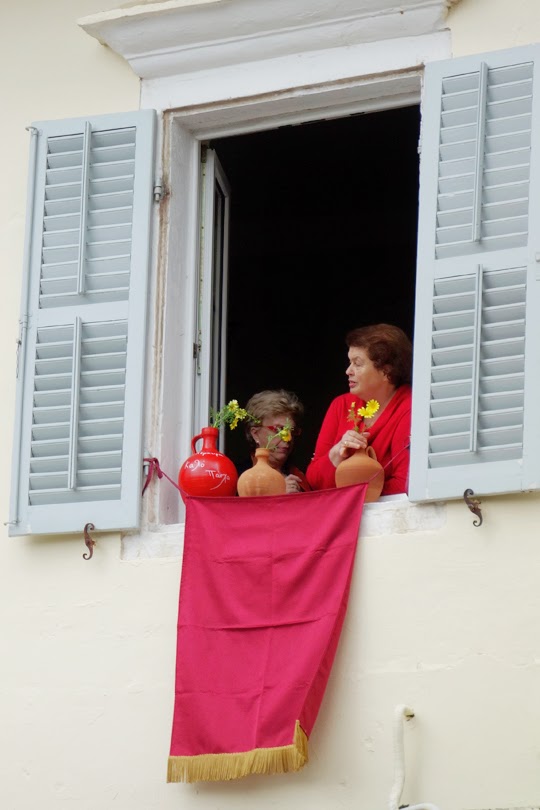 With only the smallest clearing carved out on the street below, the pot throwing started right at 11. Everything from tiny jugs to 5 foot-tall urns rained down all across the city. 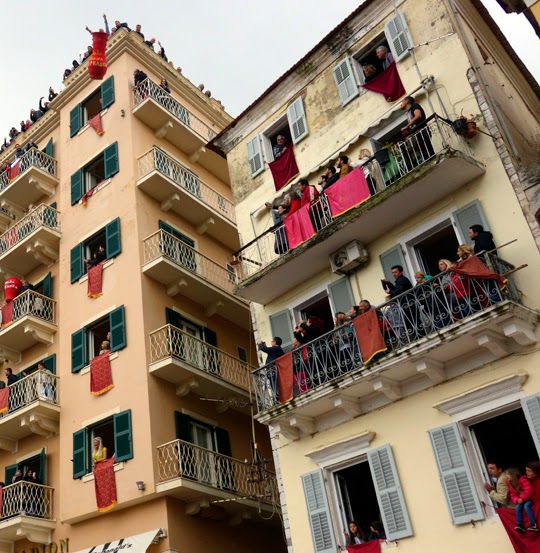 Yet another Greek Easter tradition where I’m surprised no one is mortally wounded! 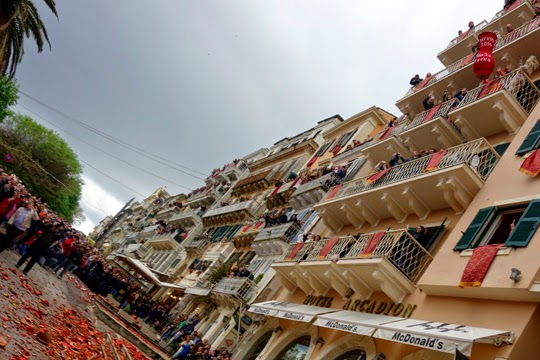 After about 15 minutes, all the pots are dropped and people hunt for shards to take home as lucky souvenirs. We found two handles and a spout to bring back. Meanwhile, a marching band comes through the crowd on top of the pottery shards. 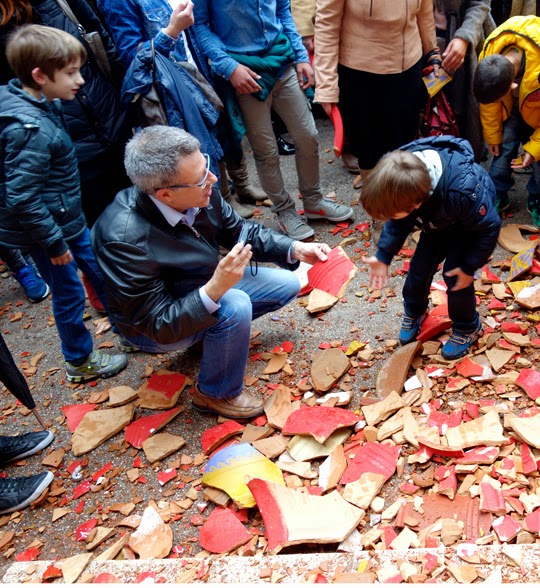 Rob and I stopped in a plaza for a drink after and then went home to rest for the afternoon, exhausted from the late night on Good Friday and traveling. Our hotel provided more candles, red eggs and candied kumquats. I think there’s mostly a series of more marching bands performing through the afternoon. At 8:00, it was time to head back out. Corfu Town was filling up slowly with people out for the “Easter Eve” festivities. Rob and I walked around and eventually decided on a popular cafe on the main plaza. Relaxed with a glass of wine that came with a free plate of assorted bruschetta while people watching. 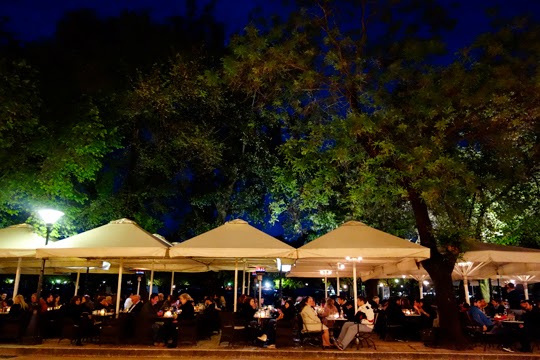 We followed a group of Greek Orthodox Priests who seemed to know what they were doing and were being filmed by the local TV station. 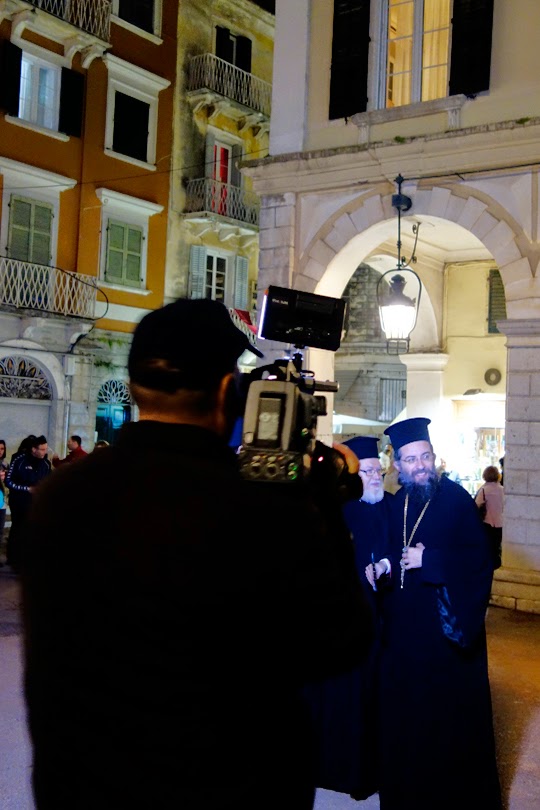 Eventually, a crowd formed, a few military color guard appeared with bayonets and we started processing up to a church, with our candles unlit. 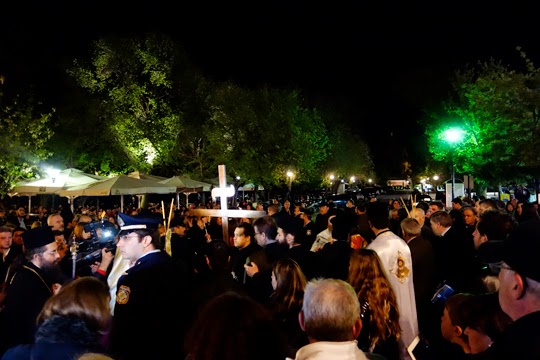 We waited a long time outside the church. Eventually some kind of fancy politician with a security detail of about eight men in suits walked through to the church. He seemed happy to see us, but no one in the crowd took pictures or shook his hand. His elegant wife and child followed. Maybe some kind of local senator? Finally, a choir sung to us from a church down the street and it was time to light our candles and follow the procession back to the square. (How does no one’s hair catch on fire!?) 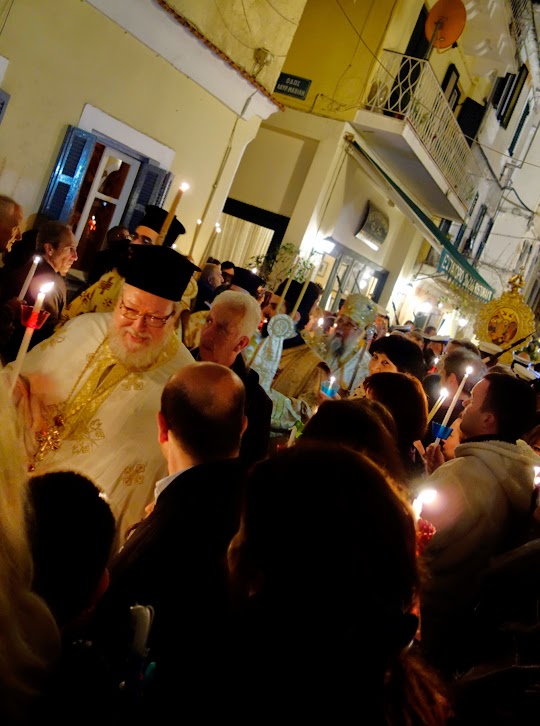 While we were waiting a crowd of probably 10,000 people had gathered in the plaza with candles lit. Chanting and singing from the gazebo. At midnight, a huge firework show started along with the chanting. Everyone hugged and kissed and wished each other “Christos Anesti” (Christ is Risen). The fireworks must have continued for at least 20 minutes! Watch a short video of the fireworks on my Instagram feed here. The crowd dispersed quickly into the Corfu streets, candles still lit. We walked back to our hotel and crashed into bed so exhausted.

There’s a long church service on Easter morning from 9:00 to 11:00 and more marching bands, but most people seemed pretty worn out by Easter weekend at this point and ready to relax with their families.

Rob and I headed to the village of Kassiopi (more on that adventure in transit shortly), passing all kinds of lamb roasting on spits along the way. We sat down for our Easter supper of lamb by the harbor and drank ouzo from a cafe terrace where locals shouted out “Christos Anesti” to each other while walking by and occasionally shot off incredibly loud guns into the air. Today is Easter Monday and a holiday for the locals to recover and prepare to return to work. 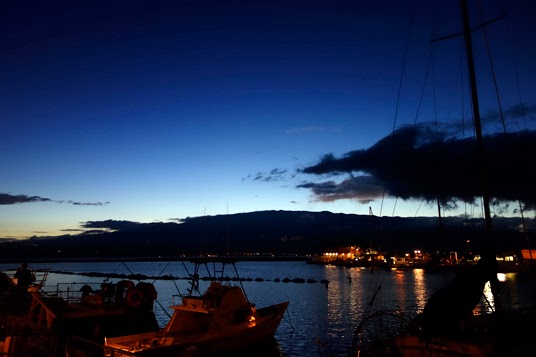 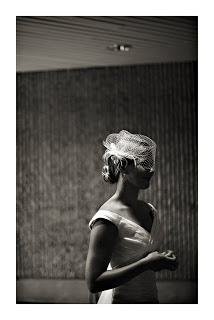