A four-foot-tall pink jellyfish chandelier…three courses of delicious seafood…one ridiculous plastic crab hat…nothing less would do for the birthday celebration of my great friend Margaret!  The night’s menu included Spanish and Moroccan flavors – two of her favorite places to travel.

Enchantment Under the Sea Menu 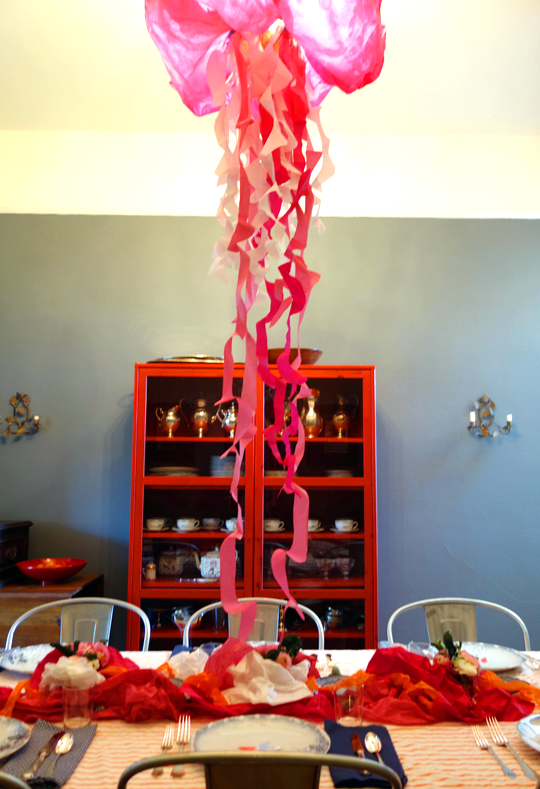 Step 1: Decorate
The enormous tissue paper jellyfish hanging from our crystal chandelier came together a few days before the party. Bold and goofy – it set the tone for everything else. The center of the table was a “coral reef” of tissue paper, ranunculus, Italian kale, rocks and urchin-like Japanese porcelain dishes. No candles because I was sure the whole tissue paper affair would go up in a blaze of glory at the first thought of fire. 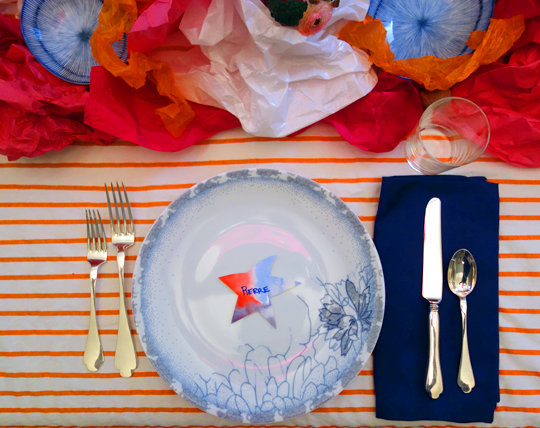 Place cards in the shapes of fish and shells were made from bright watercolored paper. 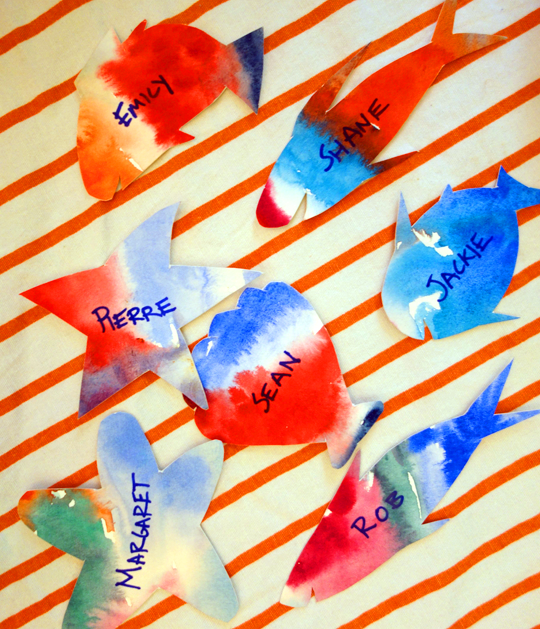 With the table set and ready to go – it was time to start on the food! 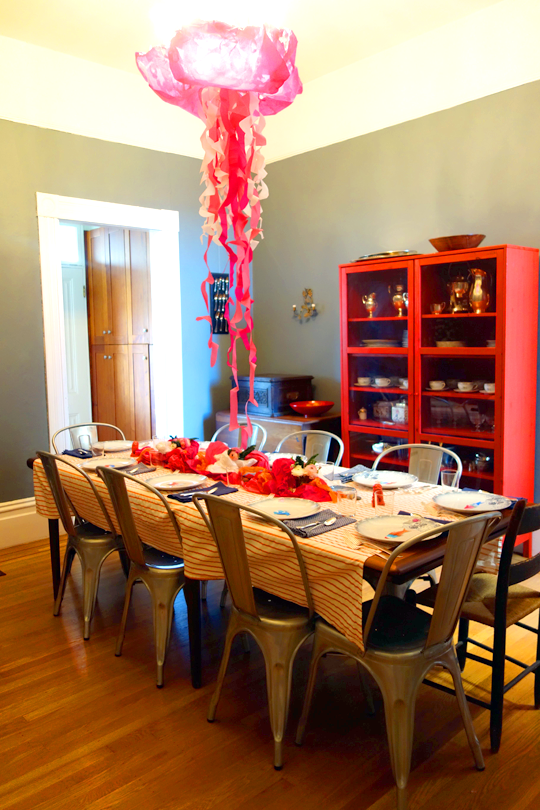 Step 2: Shop
I did all the shopping the morning of the party at the neighborhood Safeway. At this point, I still only had a vague idea of what I wanted to cook: some kind of shrimp salad, mussels and maybe a big piece of fish? I had a pot of cranberry beans waiting in the fridge for a good idea.

The nice man at the fish counter helped me select 10 raw jumbo prawns, a 2 lb bag of mussels and a massive 3 lb filet of salmon. The Spanish- Moroccan theme started to come together in my imagination.  I also picked up cilantro, parsley, mint, tomatoes, asparagus, red potatoes, cucumbers, chorizo, tahini, baguettes. And had meyer lemons, onions, garlic, olive oil and white wine at home. Total cost came out to less than $100 in supplies for nine guests. 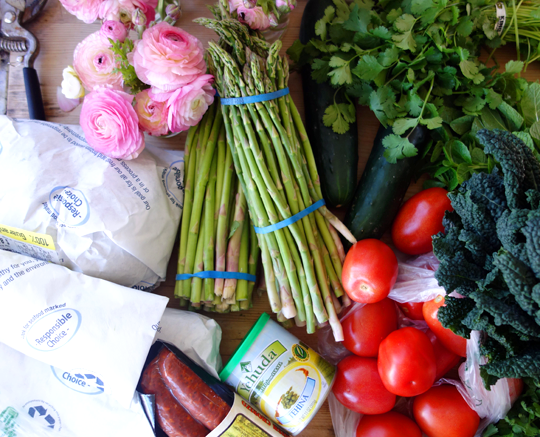 Step 3: Prep
This was entirely a make-ahead menu – which makes a party so much more fun to host and attend.

For the salads, I made a batch of hummus with the cranberry beans and spooned a bit into the bottom of small glasses. On top of that: a version of tabouli salad with black rice instead of bulgar wheat and a few pieces of cucumber. I shelled the prawns and marinated them in olive oil, onion, garlic, hot paprika, salt, pepper and lemon juice before a quick grill. The salad course was done and into the fridge! 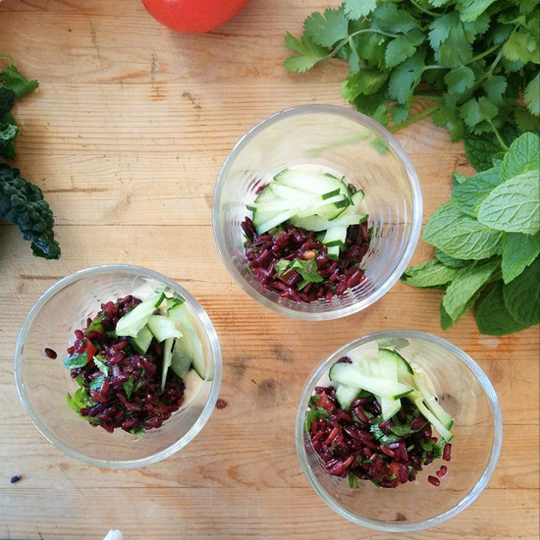 Next, the chorizo, tomato, onion, wine and cranberry bean broth for the mussels. I first tried this mussel recipe in July and it is one of my all-time favorites. That simmered while I cut up red potatoes and gave them a quick boil on the stove. Cleaned the asparagus and tossed it in a pan for later. Finally, that massive salmon filet got lightly seasoned with wine, lemon and herbs and folded up into a pretty parchment envelope for cooking later. I used the rest of the fresh herbs to make a sort of chimichurri with Moroccan preserved lemons. Tossed that on the boiled and drained potatoes and put them in a baking pan for later too. By 2:00 – all the cooking was done and out of town visitors had arrived for the evening’s party.

Step 4: Get in Costume 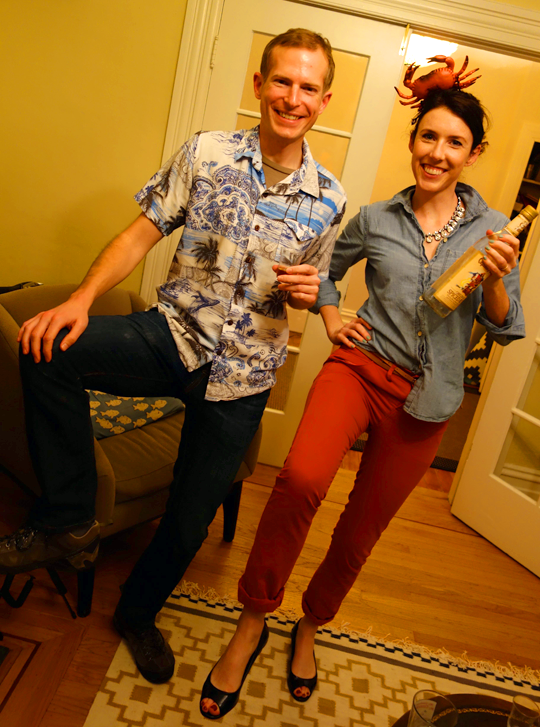 “Crab hat” has a long and storied history in our house – and usually only makes an appearance at Christmas – but I couldn’t resist. Shane wore his best Hawaiian shirt, Rob dressed as a fisherman. Sailor hats and nautical stripes all around. 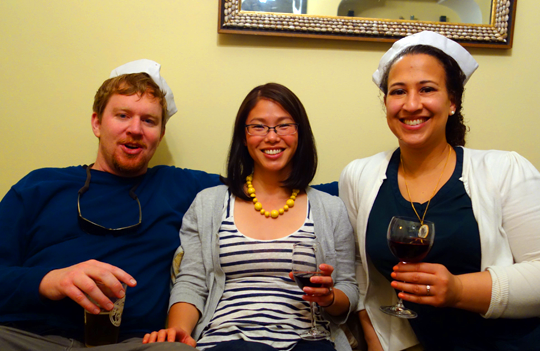 Kevin and Greg even brought their own fish to the party. With everyone here and a first round of drinks distributed – it was time to sit down to eat. 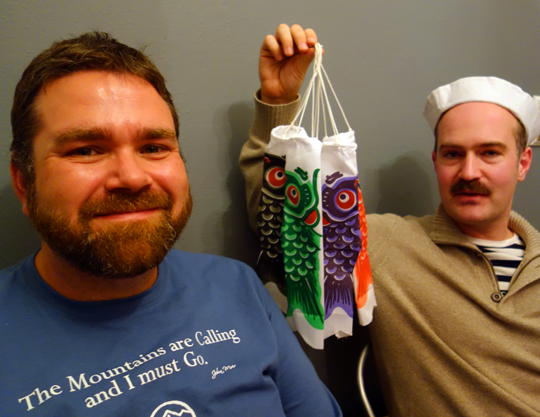 Step 5: Party!
Getting the timing right with all these courses is the real trick – but thankfully seafood cooks so quickly. The oven should be preheated to 400 before the dinner starts. Set out the cold tabouli and shrimp salads on the table and fire up the chorizo broth on the stove. Put the salmon in to bake for 20 minutes along with the potatoes and a sliced baguette and call everyone to the table. 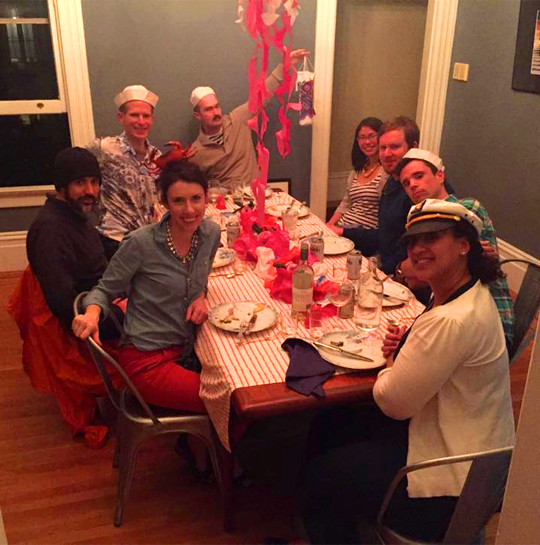 The salad course goes fast. Toss the mussels in the – now boiling – broth when you’re done eating and put a lid on. By the time the salad plates are cleared – the mussels will be cooked and the bread will be toasty warm. Boil kettle of water for the asparagus before sitting down to eat the delicious mussels with chorizo! When everyone is finished with the mussels, the fish should be done baking (I started mine after the salad – which slowed us down a bit). Pour the boiling water over the asparagus to cook it lightly. Remove the fish from the parchment and give it a few minutes under the broiler if needed. Serve up all three on a massive platter to be carved at the table. Finally, dessert – which I always try to have someone else bring to a dinner party. Jackie made a delicious flourless chocolate cake and served it with vanilla ice cream. Amazingly…we weren’t totally bursting at the seams by this point. For all the excesses of this menu – it’s actually quite healthy. No cheese or cream at all. Only the tiniest bit of butter on the salmon. Practically health food 😉

The conversation continued long into the night. I caught Jackie toasting the jellyfish on her way to join the group in the living room for the rest of the celebration. Happy birthday Margaret! Things I Love Today: Passport Cover
Rob and I tore through the apartment last night in… To Do: Book a Hotel in San Francisco
Anne wrote in with a good question about visiting San…