I am normally extremely good at looking on the bright side of things. It’s my profession and almost my vice. My instinct is to be polite about Fes, but really…I just disliked it so, so much. I’m angry at the city for wasting our time and money – and a secretly bit glad that Rob barfed all over it….but, I’m getting ahead of myself.

In our second day in Fes, Rob and Matt went biking while Lauren and I explored the medina. We managed to get lost for over an hour trying to find literally the LARGEST thing in the old city that was just a quarter of a mile from our house. (Fes, in one last attempt to annoy me, continues to be super photogenic in these pictures) 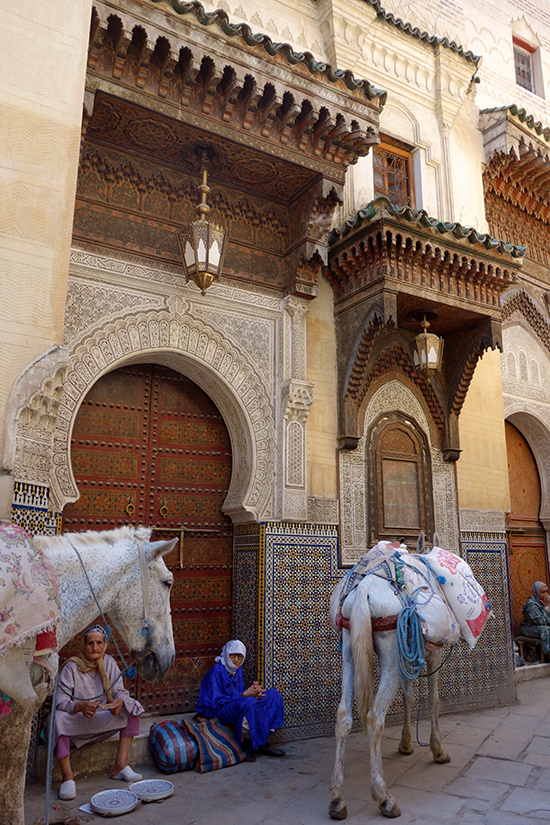 While lost, we were sucked into a jewelry store with a centuries old ceiling which was very pretty. The owner charmed us and we thought we did a good job of negotiating but realized later that we overpaid by a factor of at least 30x for a few necklaces and bracelets. 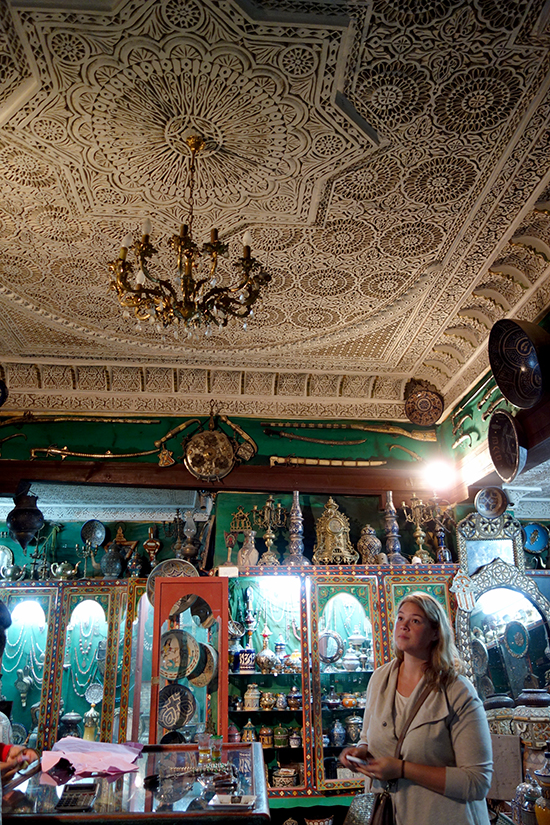 Fes is very much a workman’s town and while lost we passed all kinds of small workshops. This one was carving cedar and super fragrant. This was apparently the oldest brocade weaving shop in the medina. 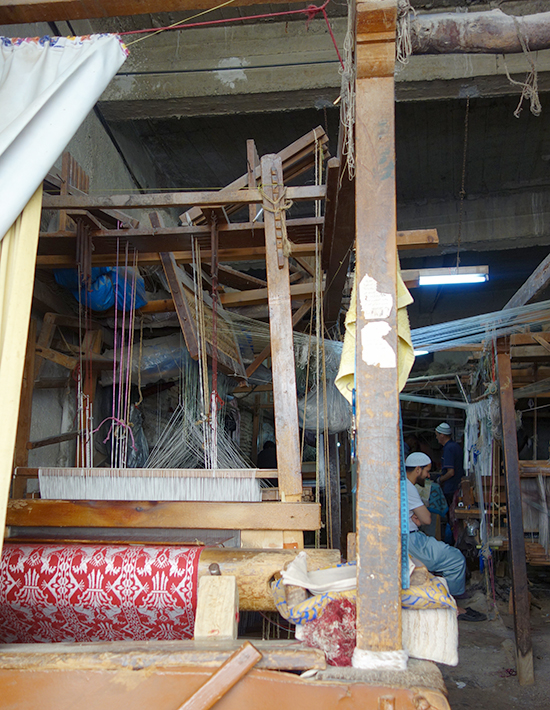 Donkeys were everywhere. Donkeys to collect garbage, donkeys to transport leather hides, donkeys carrying bricks, donkeys being ridden side-saddle on the way back to pick up a new load. On those tiny alleyways, I’m still amazed that no one seems to get their feet stepped on by the donkeys rushing past. 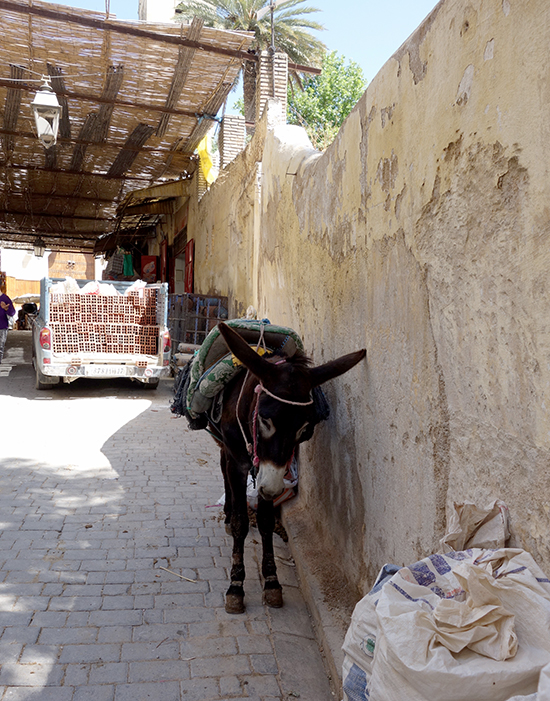 Finally, we made it to the tanneries. I think one of the guys trying to be hired as a guide took pity on us after seeing how lost we’d become and helped us find the way with no charge. They give you a sprig of mint at the door to help with the smell before you walk up to the terrace to overlook the pools dating back to the 8th century. The white pools are lye, made from pigeon droppings that the locals collect and sell to the tannery. The dark pools are dyes. You can stand up on the terrace and watch the workers (some as young at maybe 10) strip hair from the hides with knives, wade in the pools with the skins and lay the pieces out to dry on hay. With that goal finally achieved, Lauren and I walked up to Cafe Clock via the main shopping streets – only getting lost about five times this direction. Camel burger, mint lemonade and a salad platter. Camel meat tastes like lamb. Everything was tasty, but the heat had sapped our appetites. 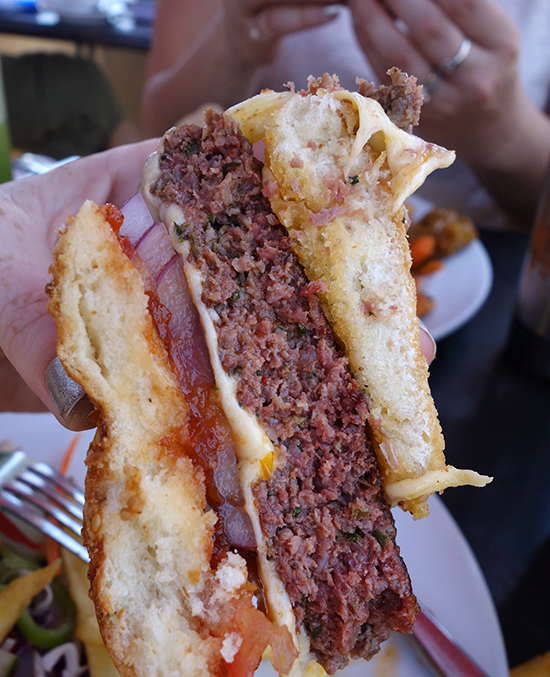 Headed back to the house through the busy streets for a bit of a rest and a cool-off after our miles and miles of walking.  We were harassed by a few eight year old boys in a dark alley. Made it through unscathed and just annoyed. In the evening, we had arranged to pay for a cooking lesson and dinner at the home of the assistant for our apartment. Rob had a bit of heat stroke from his bike ride and wasn’t feeling well, but insisted on coming with us. Our host’s wife showed us how to make couscous in her kitchen. 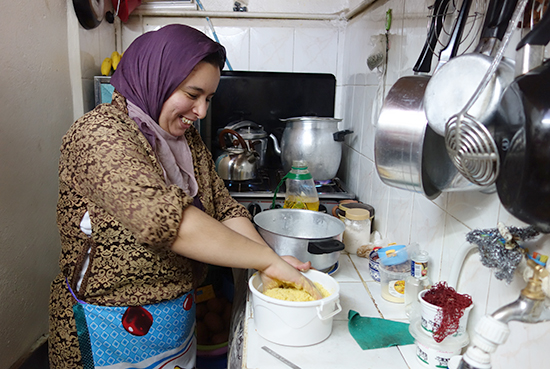 Their youngest daughter was charming firecracker who entertained us while we waited for the food to cook with taking pictures with my camera and showing us her homework. Poor Rob was lying down at this point after almost fainting in the kitchen. 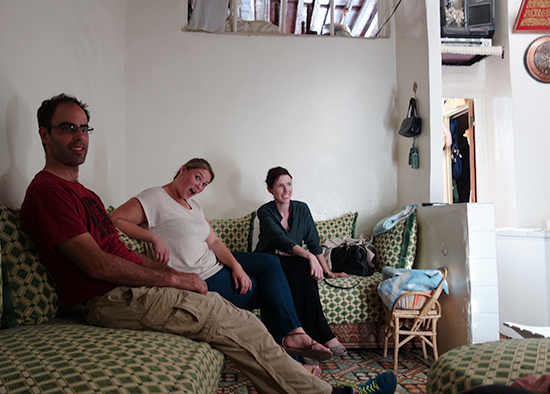 Her teacher apparently handwrites the worksheets (in red) for her to copy (in blue). We went up on the roof to get a view of Fes at sunset while waiting for dinner. Here it is, looking very pretty and charming from up on high. We taught the daughter a few games like “thumb-war” and “slap jack.” She cutely bossed us all around, especially her brother and father. I think I look so much like my Mother in this photo. 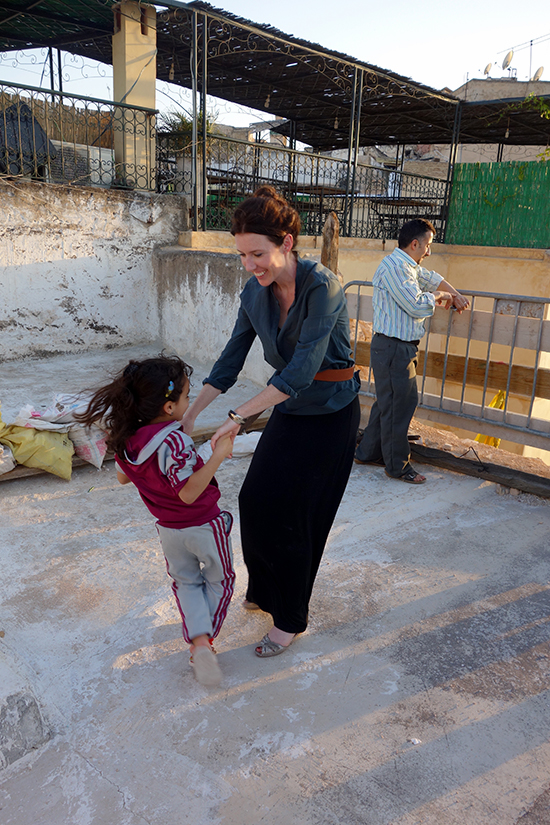 We sat down to our first course – the typical local fava bean and garlic soup – and that’s when Rob lost it. Poor Rob! He turned the same green shade as the sofa and excused himself to the tiny bathroom right off the kitchen where he proceeded to vomit copiously all over the squat toilet and his own pants. He tried his best to try to wash it up, to no avail, and was so mortified. We apologies profusely and discussed taking him back home, but the host insisted that he stay and gave him a glass of a local spice mixed in water that is supposed to help with stomach issues. Rob passed out in the corner, a gray green color, while the rest of us at the couscous with chicken and vegetables. 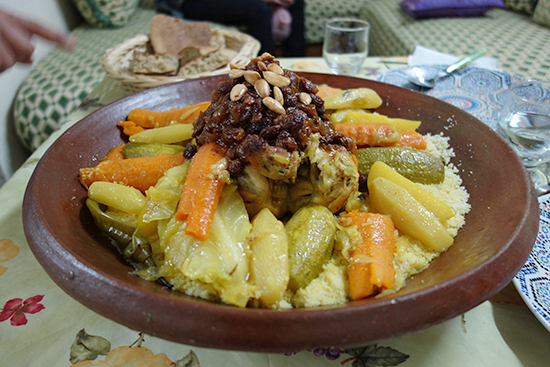 We were getting ready to leave to take Rob home, but were begged to stay for dessert and tea…and a 20 minute pitch to sell us argan oil and cookies. Ugh. I thought we had built up a good relationship with the host by this point and the sales pitch was a disappointing turn. We would later find out that he overcharged us for several other things. Not a major expense by any means and, sure, there’s a case that he is just trying to do his best to make money in a rough city, but frustrating for a culture that is supposed to be driven by trust and relationships. Now that we’re in a different Moroccan city, with hosts who are actually helpful and kind to us – the contrast is even sharper.
Next up, we leave Fes and everything gets much, much better! What to Wear: Winter Wedding
Winter weddings and cocktail parties call for a new surge… 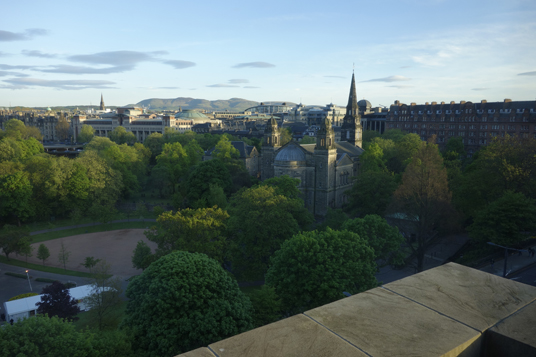 Travel: Edinburgh
Next up: Edinburgh! Rob and I took a day train…