After six weeks of traveling, it was finally almost time to head back to the states. This trip had been eventful to say the least. There were so many great memories, and a couple really challenging ones. We need to get our mojo back after the dog situation. Rob decided we should finish strong. Time to take to the skies with some paragliding over Lake Annecy. 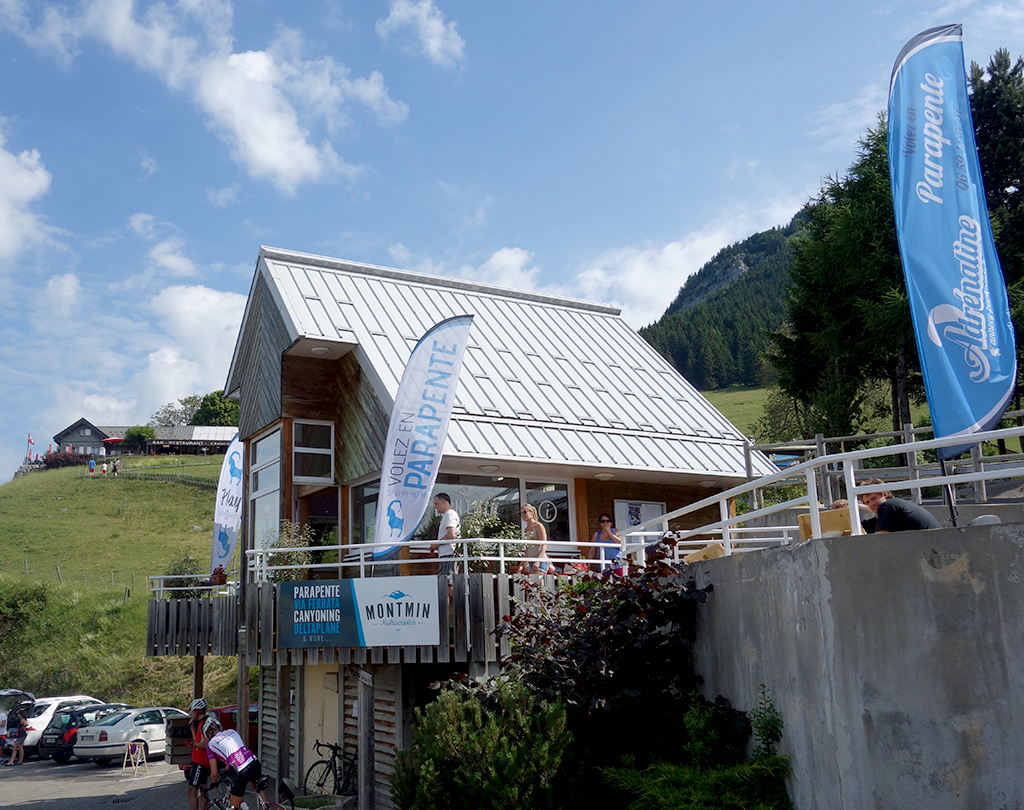 We booked out “baptism flights” through PlayTheMountain.com. They spoke English fairly well and were flexible in making our arrangements for a 11:00 departure. Paragliding is one of the few things that’s cheaper in France than in the US. Our flights would be $80 each, compared to about $200 in the states. Anyway, can you really put a price tag on an experience that will “ensure your dreams?” 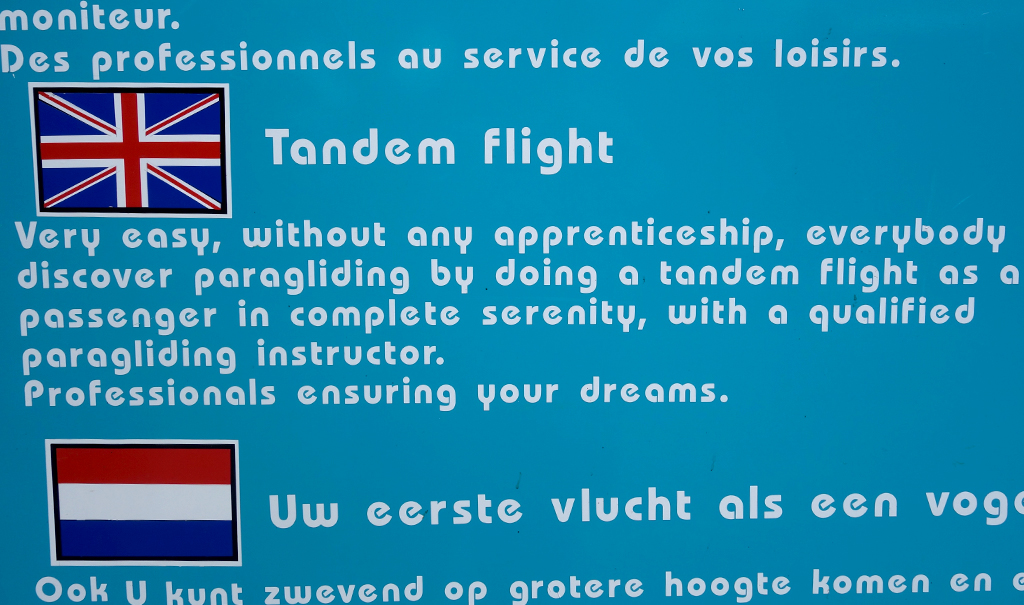 We loaded into a van for the short drive up to the “runway” point on the hill. It looks a lot steeper from here than it did on the side picnic area the day before! Smartly, the instructors waste no time getting you suited up. No time to worry, you’re just running off a mountain into the abyss with a perfect stranger that speaks a different language. 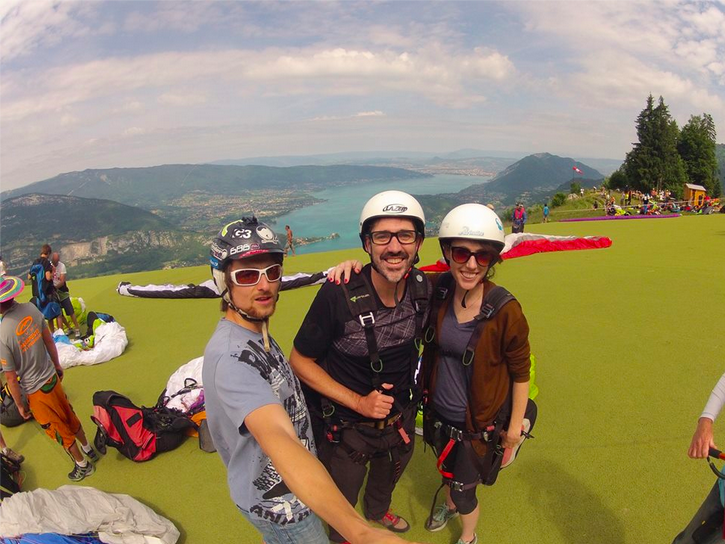 You clip in to the parachute. The instructor does a maneuver to lift the parachute into the air. Run, run, run (whatever you do, don’t stop running) down the slope and whoosh!…you’re flying. 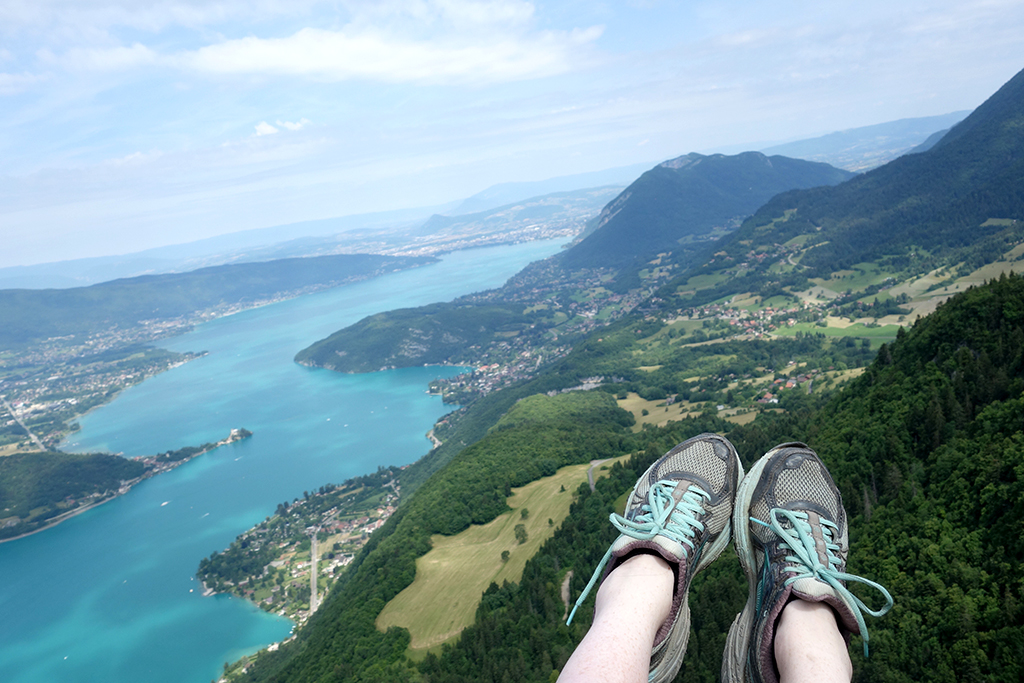 I’m not one for heights, but this wasn’t that scary. It’s so quiet as you skim over the tops of the trees. We turned back to see Rob take off from the ramp. 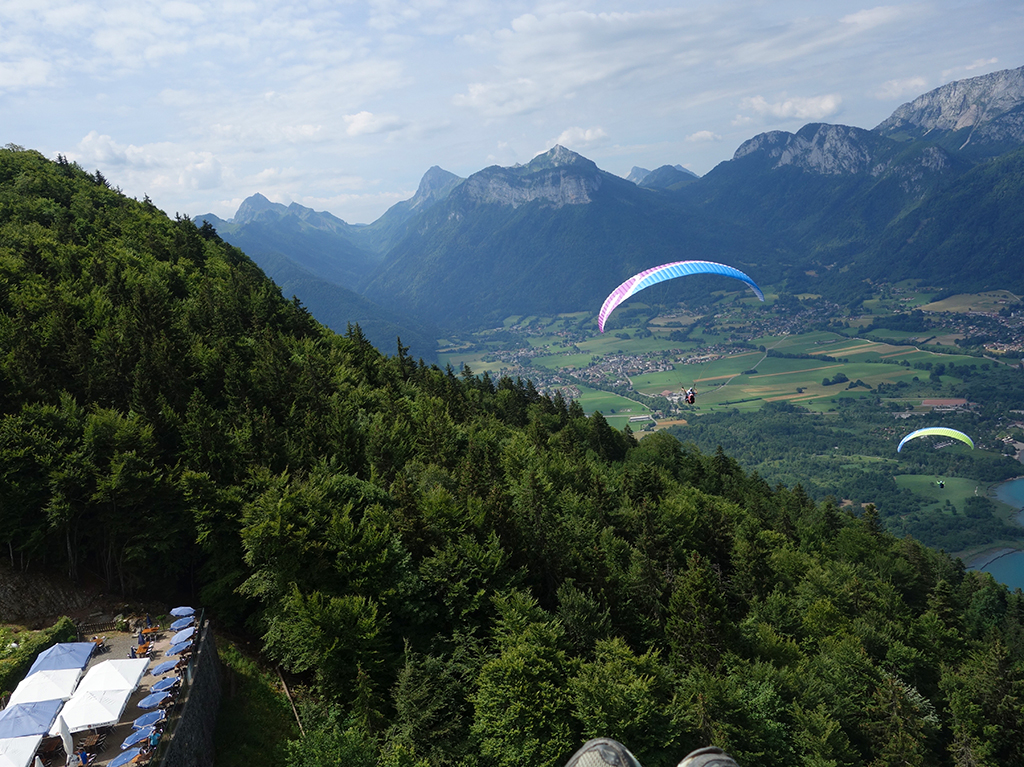 It’s at this point that I realized I was going to have to make awkward small talk with the instructor strapped to my back for the rest of the flight – somewhat more daunting for me than the flight itself. What is the proper etiquette for that situation? I really wanted to ask about all the things that could go wrong, and the various dangers, but limited the chat to how long he’d been flying and the pretty views. 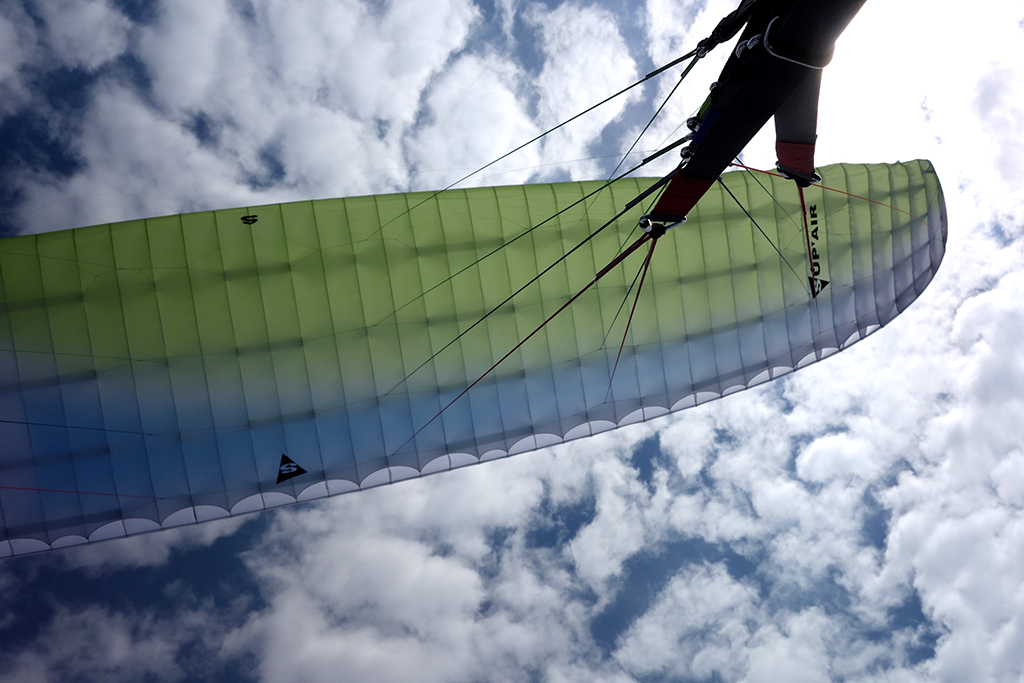 As we turned south, he turned over the controls and taught me the basics of speeding up, slowing down, turning right and left. I was pretty delicate with the maneuvers using my chewed up arm. 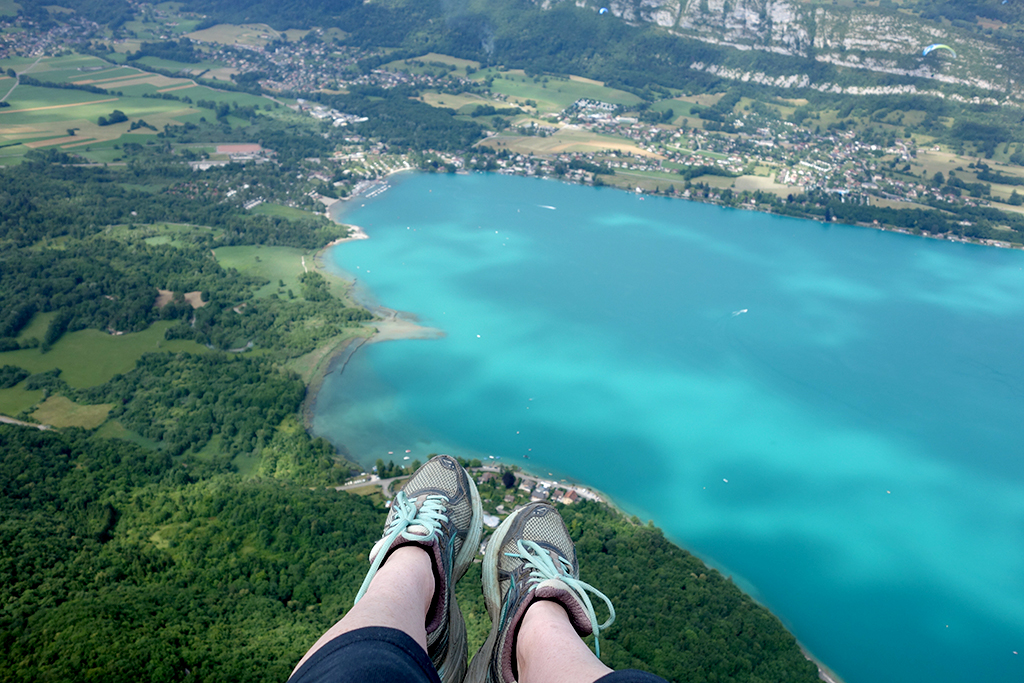 Rob is more of an adrenaline junkie than me and his instructor had them doing all kinds of tricks that looked terrifying from a distance.

The scariest part was when the instructors took us into a tailspin down toward the landing field. Some serious g-forces as we spun around like a berzerk maple helicopter seed. We hadn’t really covered landing procedures, but it seems the same as taking off: just keep running! 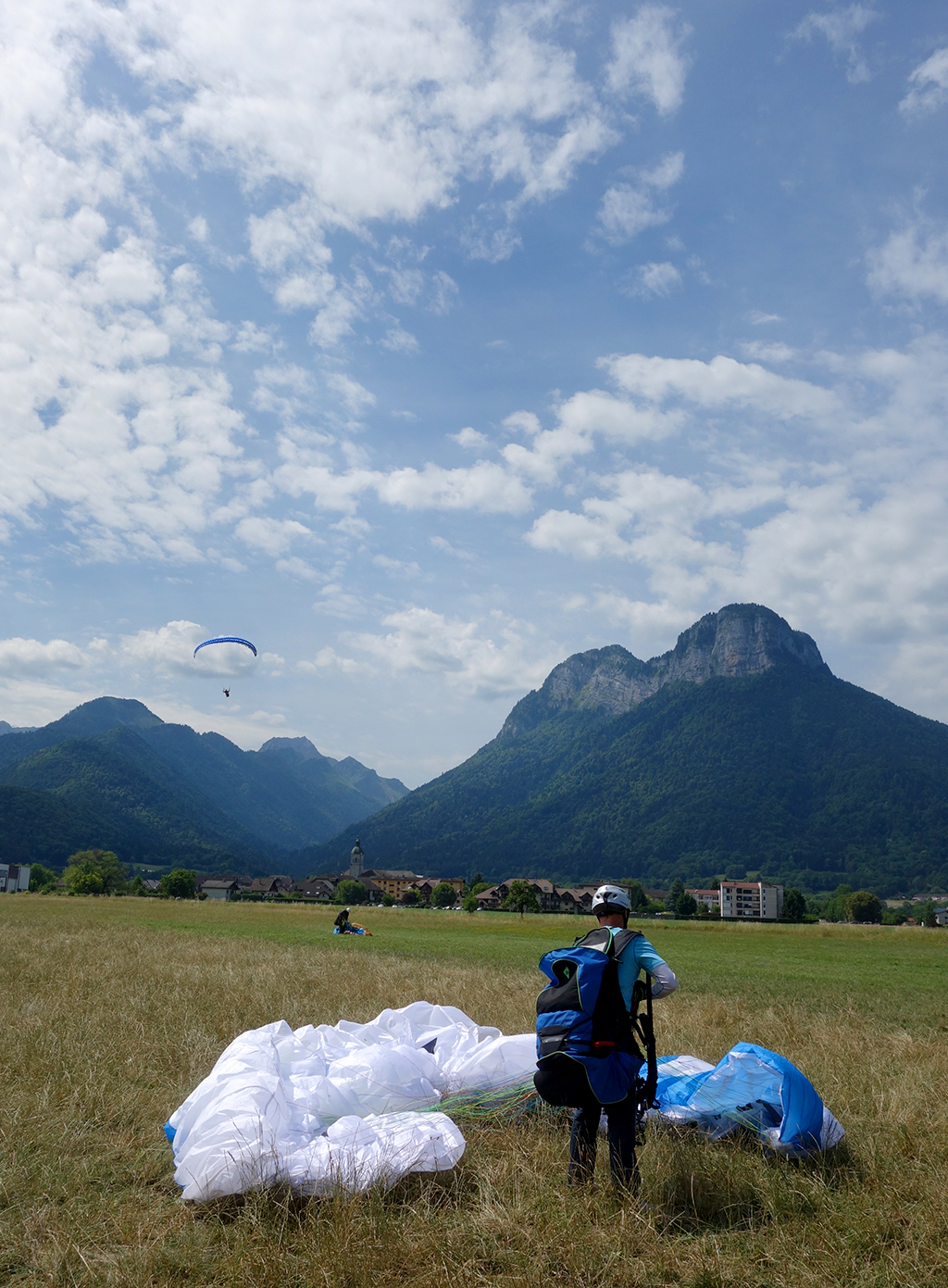 Woo hoo! Back on solid ground, still a little woozy from the tailspins. The instructors loaded us up into a van for the drive back to the top of the mountain – with a few other paragliders hitching a ride up in the extra seats. You only need two days of instructions to take off on solo paragliding flights. Rob is quite tempted to get certified next time we’re in the French Alps. 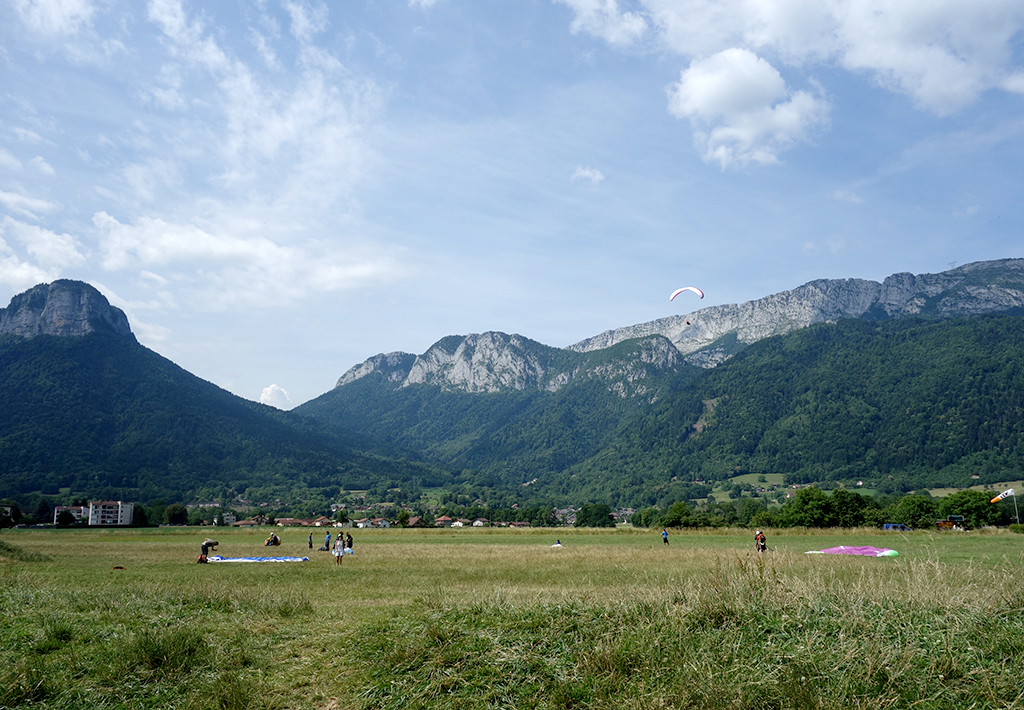 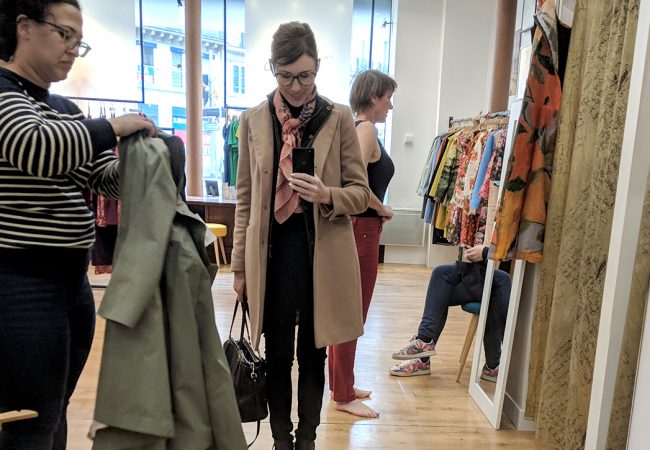 Where to Shop Paris: Dresses
We came home from Paris with 9 new scarves, 6… 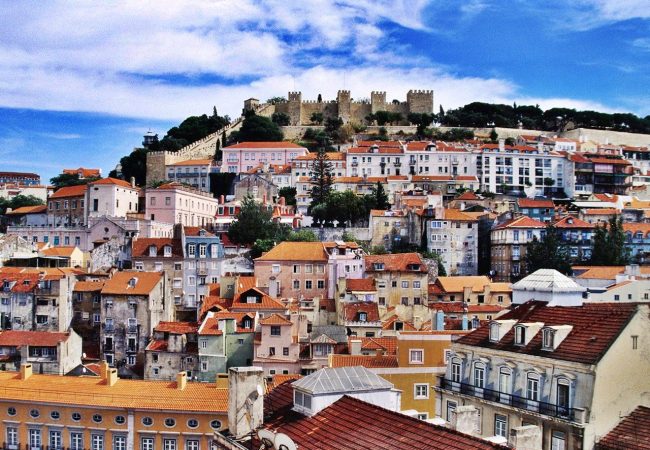 We’re going to Lisbon, Portugal
Our spring travel plans are coming together! We'll be in…