I just realized that everything I did this weekend could have been done in San Francisco before 1952. Well, except for blogging! On Friday night, we had a quiet dinner at home (built 1907) and listened to albums by candlelight. It was a nice way to stay cozy from the storm that would plague us all weekend. Up early on Saturday morning to clean the house and bake a layer cake. We had to be at Everett Middle School at 9:30 for the Obama rally. Fortunately, this lovely 1920’s mission-style school is just down the street. The auditorium was packed and John Kerry was more impressive than I expected; handsome, funny and really smart (there’s video of his speech here or a first hand account here if you’re interested). When we left at 11:30, a spitting rain was making it miserable outside. Margaret and Jackie arrive shortly after we get back home. Copious amounts of lavender earl gray tea along with the yellow-chocolate-toffee cake for Margaret’s birthday. Still raining, we take the subway down to Macy’s (opened 1945). Shoe sale! We have lunch in the basement and then go to Britex (opened 1952) to drool over four stories of fabric and notions. Here’s Jackie at the button counter.

Back at home to crack open a bottle of champagne and dry off. At 7:00, we take the train to the Haight for slices at Escape from New York and American Gangster at the Red Vic movie theater (okay, opened in 1980, but movie theaters were first popular in the 1920’s). We get back home at 11:00, still raining, and Jackie heads back to Davis.

Rob and I had plans to make the most of the quiet afternoon but the bitter cold weather kept us at home. My cousin came by at 4:00 to inherit our old TV. I made valentines with ribbon from Britex and prepared for my upcoming business trip (I’ll be gone on Tuesday and Wednesday). 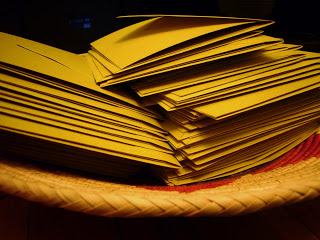