Those moments when you go from feeling like a seasoned veteran to realizing you’re a jerk who knows nothing are a common, humbling part of traveling. As was the case with my plan to take Lauren to a traditional hammam experience in Morocco.

Rob and I went to a centuries-old Turkish hammam (bath house) when we were in Bodrum last year and thought it was quite an adventure. So, when we arrived in Chefchaouen, I asked our hosts at Riad Gharnata about setting up a hammam visit for Lauren’s last day. Sure! – they said – the hotel’s cook/housekeeper Monica will take you, and it won’t be any problem at all for you to keep your bathing suits on. Just bring your own shampoo.
At 4:00, we met Monica in the lounge and helped carry over a few buckets of supplies and towels from hotel. The hammam we visited was just around the corner – with men’s hours in the morning and women’s in the afternoon. It was immediately apparent that this would be no westernized, rose-petal and bathrobe version of a hammam experience. This is Lauren’s face for when she knows I’ve gotten us into a bit of situation…I know it fairly well. 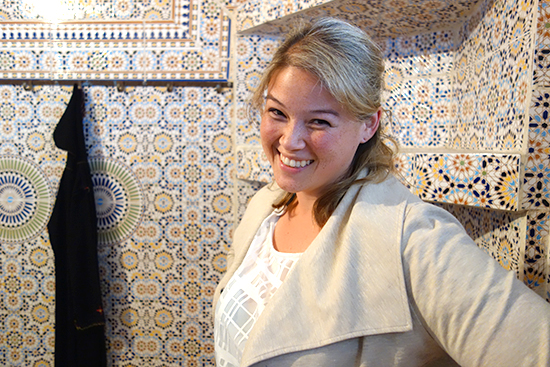 We stripped down to our bathing suits and stored our bags in a cubby in this waiting room. So far so good, right?
Then, through the doors into the hammam itself – a 10×15′ tiled room with the classic arched ceiling, a tiled hot fountain at one end and a cold sink. Another woman, about our age was in there bathing already on a small stool, just wearing underpants. Monica set down two mats for us to sit on and went about filling up about 6 buckets with water. The woman who ran the bathhouse, herself fully dressed, immediately gestured for me to hand over my bikini top. Lauren had on a one piece and was instructed to pull it down. Not too weird yet – Lauren and I are former co-workers turned friends – we could be cool with this.
Monica stripped down herself and started lathering us up with an argan oil soap that looks like molasses and is sold by the scoopful in the medina. Rinsed off with ladles of hot water from the buckets. Then, I was the first to get scrubbed with the mitt. For about 20 minutes, every (every) inch of my body got buffed down by hard-working Monica – front and back, up and down, with special attention to the backs of my arms and calves. Massive amount of skin sloughed off into the tile floor – which then the bathhouse woman came and washed away with extensive commentary in Arabic. Lauren was next – at this point having her bathing suit completely taken away – while I was left to shampoo my hair and brush it with a sort of horse comb. At some point the young woman left and a woman who was about 70 came in to bathe. The bathhouse woman popped in and out to provide what seemed like a running commentary about us in Arabic.
Lauren’s scrub finished and now it was time for the massages. My bikini bottom was taken away at this step – more like snatched away by the bathhouse woman – while Monica massaged me head to toe with the argan oil soap. I tried to turn over while oiled up and somehow managed to slip while already lying on the ground and start inelegantly sliding toward the drain. A hilarious scene that the whole bathhouse laughing.

A very extensive massage followed – it’s fair to say I now knew Monica “in the biblical sense.” Lauren’s massage went next while I relaxed. Soaping our faces next, followed by a mud mask appearing to be actual mud. The we both rested while Monica scrubbed herself – with the bathhouse woman coming in to do her back. At this point, we were resigned in our nakedness.

Body soaping came next and then we were rinsed off while standing up – which was challenging since I was about a foot and a half taller than Monica. We were wrapped with towels and sent to relax in the waiting area while Monica finished up and brushed her teeth. We survived! 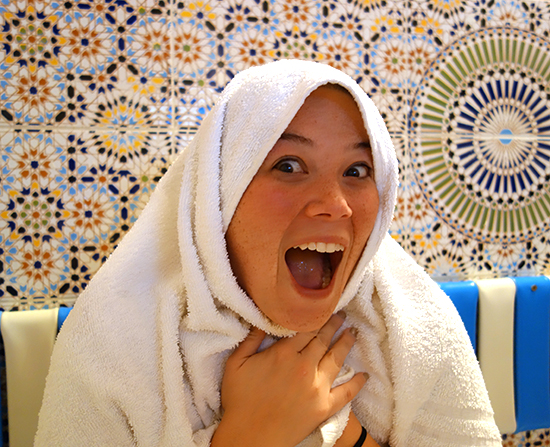 Lauren and I could only laugh at our accidentally very authentic hammam experience and take selfies. Our skin was exceptionally soft and clean. Quite the authentic Moroccan afternoon. 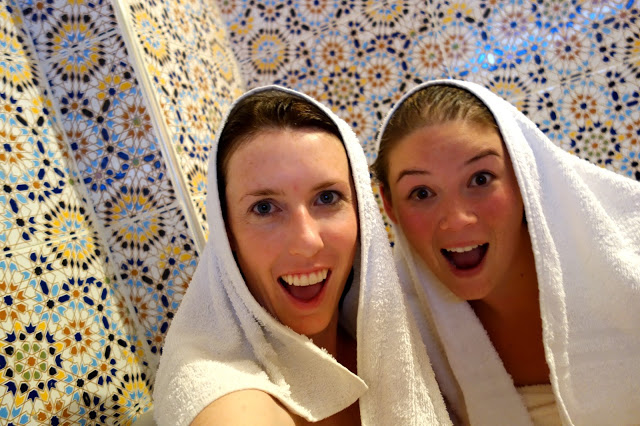 The women insisted on wrapping our wet hair under hijabs before exiting. Part of the hammam process, I guess. We finally bagged up the towels and went to pay. Much discussion on all sides – which is usually a sign that they’re debating how much to overcharge the westerners. The woman finally decided on 110 dirham (about $11) for all three of us together and enlisted another woman who spoke French to translate from Arabic. Lauren and I paid up and posed for a photo: 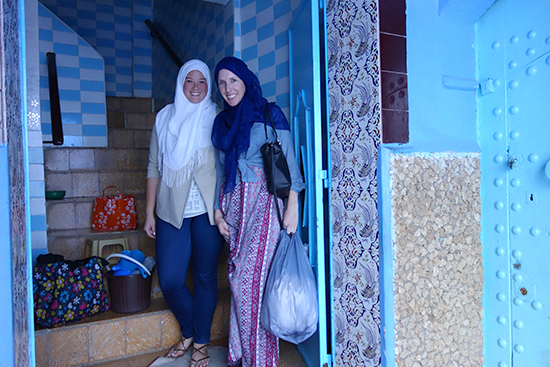 Which, in turn, made the bathhouse woman want to pose with us…. 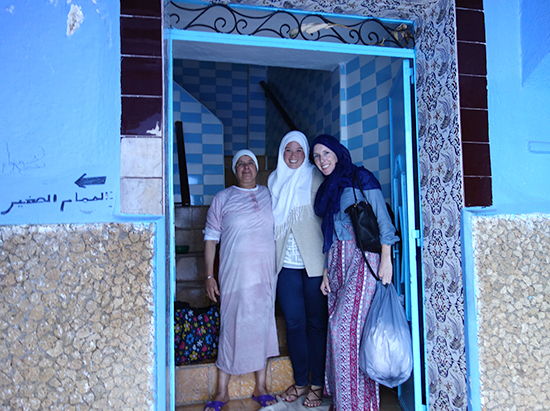 …and also sweet Monica. We paid her a little extra back at the hotel for our massages, but the whole thing was still a crazy low price for 90-minutes of scrubbing and cross-cultural exchange. We sat for glasses of tea at the hotel with our hijabs on and kept startling the hotel staff who took us for “moroccain” at first glance. 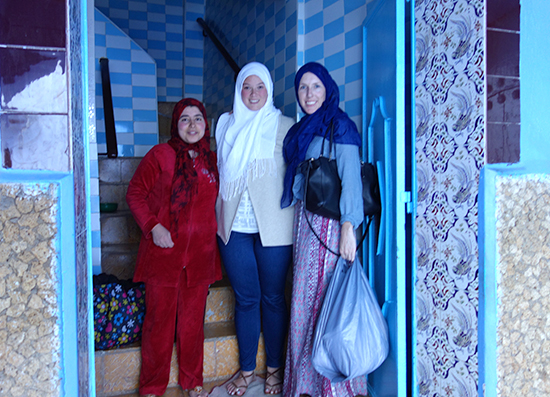 Was it relaxing? In maybe a freeing, Buddhist detachment kind of way where you’re giving up things you’ve held closely, like modesty, and have no sense of free will. Was it effective? Yes, Monica turned both of us into gleaming Moroccan jewels with argan oil skin. Was it interesting to have a legit bathhouse experience; probably the same way they’ve been doing it in Morocco for centuries. Yes!

Advent Calendar: December 21
It's the final advent calendar post and time to reveal… 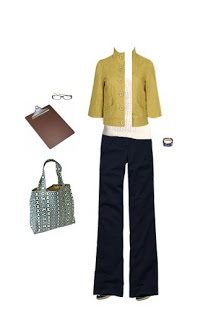 What to Wear: Field Trip
Becca has a week-long trip around Southern California for work…