We sent Lauren off in a taxi for Tangiers to start her journey home in the morning Tuesday and I spent a day in bed with “traveler’s stomach.” A not-so-glamourous payback for eating street food and fresh fruit when we first arrived in Morocco. Just slept, drank bottled water and ate imported Pringles while watching American movies dubbed in Arabic on satellite TV.

The next morning, I was feeling much better and joined Rob and Matt for a hike to the famous Akchour waterfalls – where they had mountain biked with their group of local friends the day before. We arranged a driver for 300 dirham ($30) to drive us 45-minutes out and wait to pick us up 4 hours later. 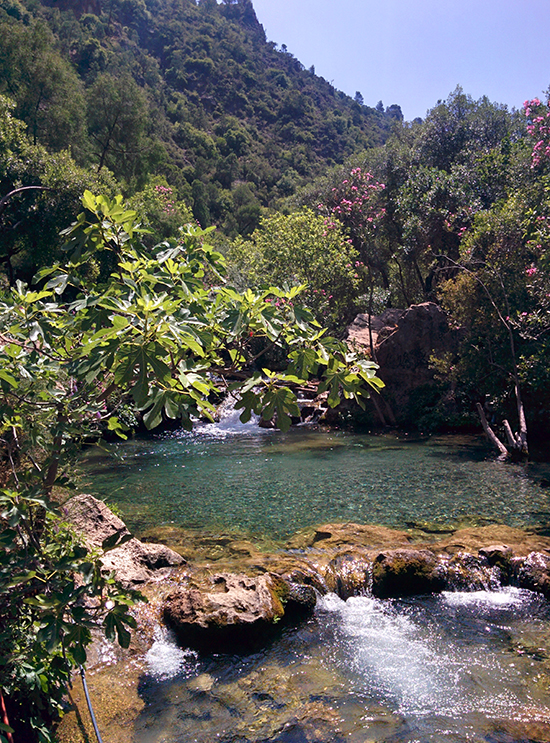 There are eager guides for the hike available at the trailhead, but there’s no reason to hire one. It’s an easy, fairly well-marked route along the creek. We had a couple dogs for guides instead. 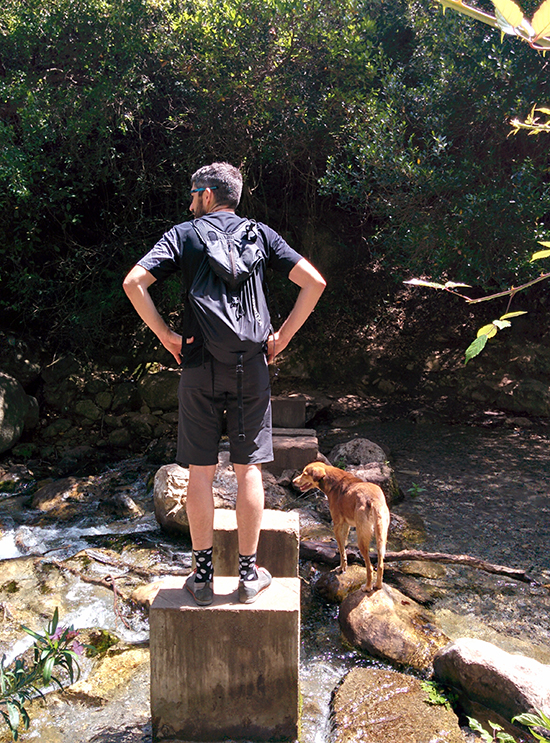 The area is becoming popular with rock climbers as well. Supposedly, there are monkeys – but we didn’t spot any. 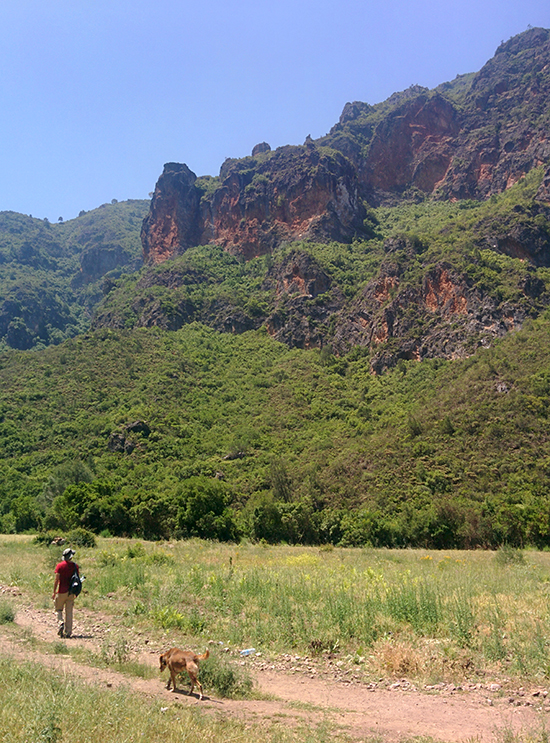 Lots of pink oleander along with the fig trees and red rocks. 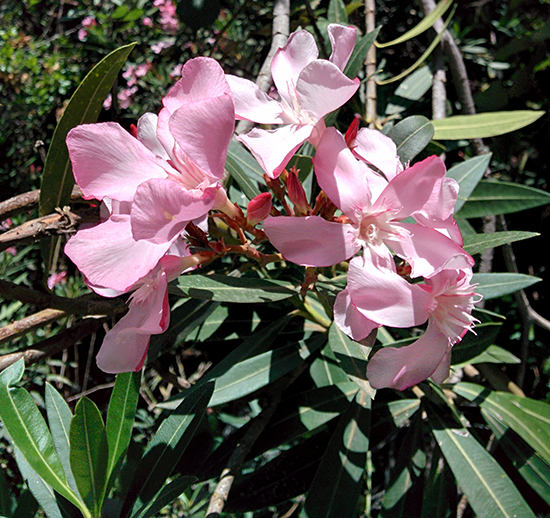 Little cafes along the path serve tea, tangines and orange juice – everything appearing to have been carried up by hand by the workers. They lay hoses in the river to provide cool water to the cafe camps. 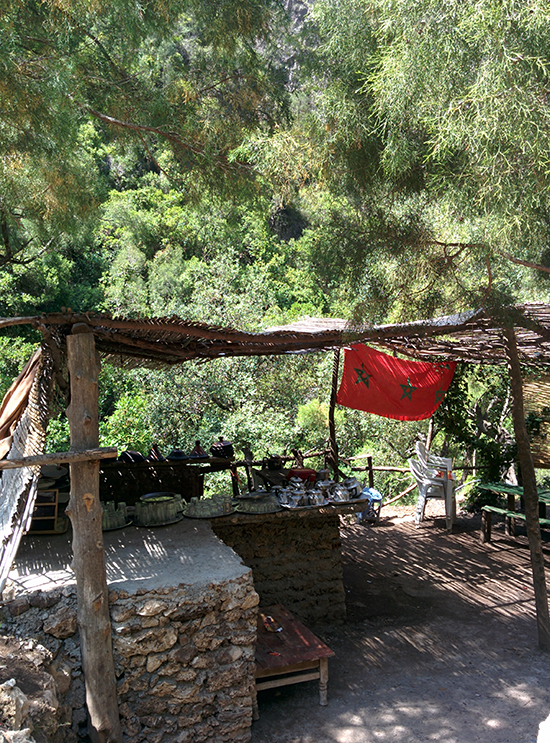 We reached the falls in just 1.5 hours at a brisk pace. They’re gorgeous! About 100 feet tall in a small rocky cut out – almost impossible to photograph. We changed into our swim suits behind a boulder. I had seen some Moroccan women in bikinis on our way in, so didn’t feel too weird wearing mine despite other women there in full hijabs. My rashguard layer for the sun, not modesty. 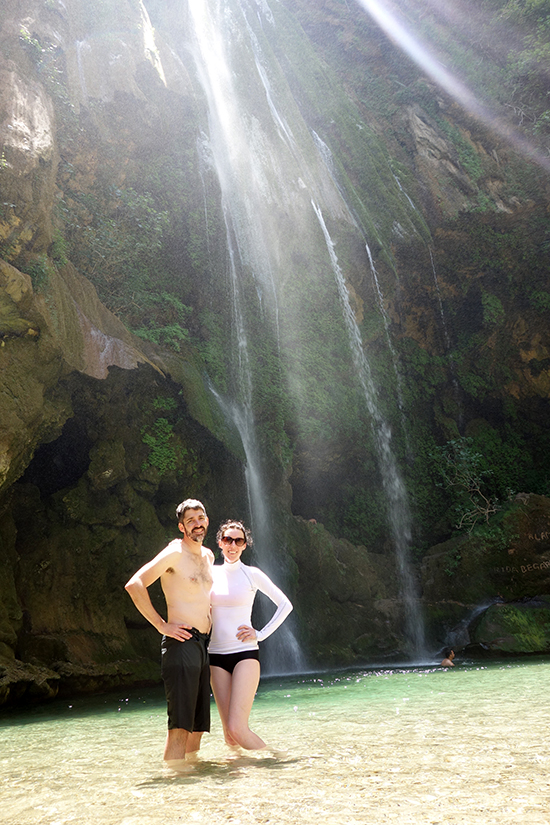 The water was crystal clear and cold. Rob said the locals they biked with drank it straight from the river. 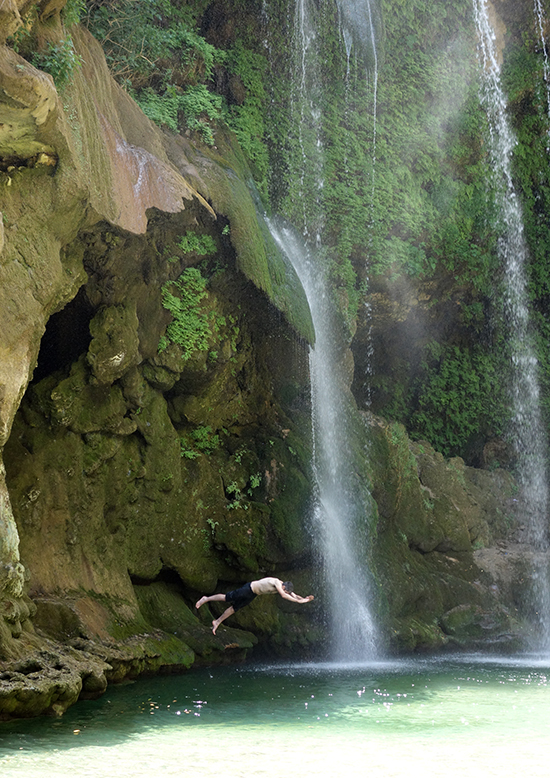 We hung out with the with the Moroccan tourists, swimming for about an hour. It must be amazing here when the summer gets really hot. 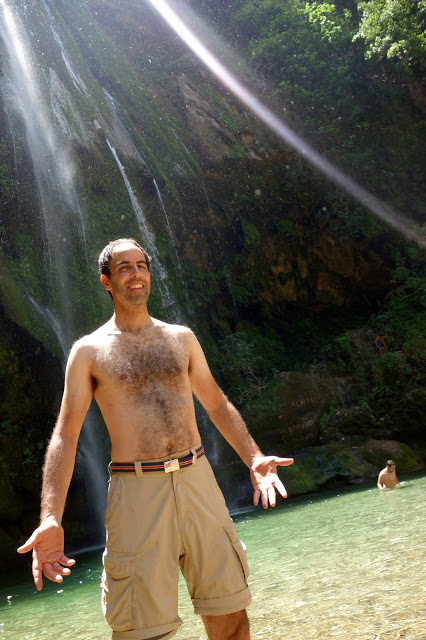 We started the hike down – which was actually tougher than the hike in. I took a couple spills trying to come down steep muddy trails. 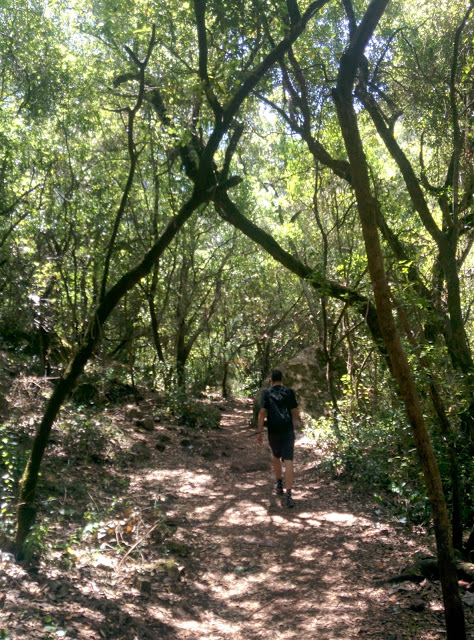 Made it down the hill in an hour – bits of coastal fog hitting the top of the mountains. There’s two fancy new hotels – probably 10 rooms each – being constructed near the bottom of the canyon. 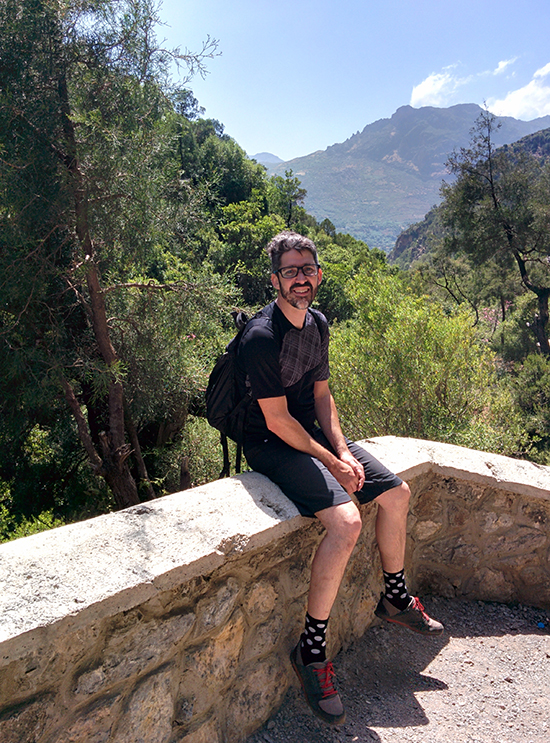 At the bottom, a deep pool is created by a  small hydroelectric damn. A tagine cafe had set out plastic woven rugs along the banks of the lake for lunch. 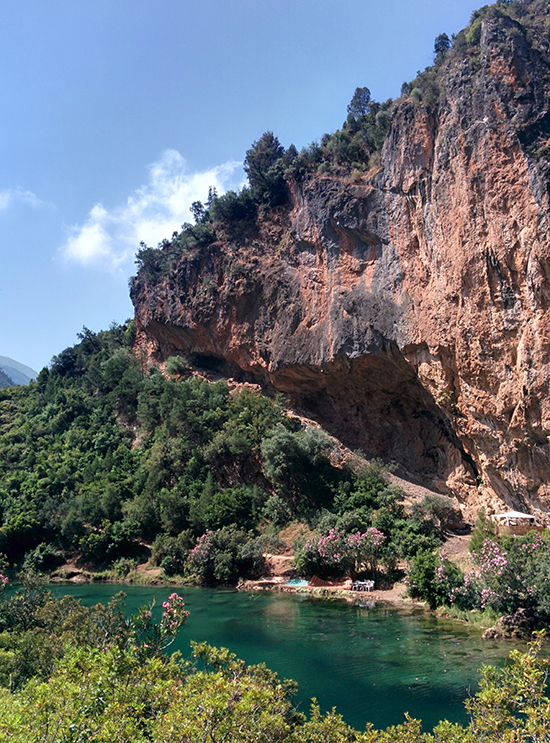 We ordered a small tagine along with a pot of mint tea. Relaxed by the water on our mat (shoes off) for 30 minutes while the tagine cooked on the fire. Even with my delicate stomach, I dug into some of this simple dish with spices, peppers, tomato, potato, onion and chicken. Our driver was waiting for us at the trailhead exactly on time for the drive back to Chefchaouen. Such a fun day of nature in Morocco! Weekend Round-Up: Tag Sale
This was a mellow weekend; a much needed break after… What to Wear: New York Vacation
Traveling in the winter can be so nice. But it…