A few months ago, Rob took on a volunteer role as the new community organizer for a group called SFUR, promoting trail riding in San Francisco. It has been fun watching him build a network of supporters through pancake breakfasts, speaking at City Hall and trail work events. He asked me to help host a dinner party last night for 9 people, including the visiting representative of IMBA, the International Mountain Biking Association. The menu made the most of the good summer produce, with options that could accommodate everyone from paleo to vegan eaters. 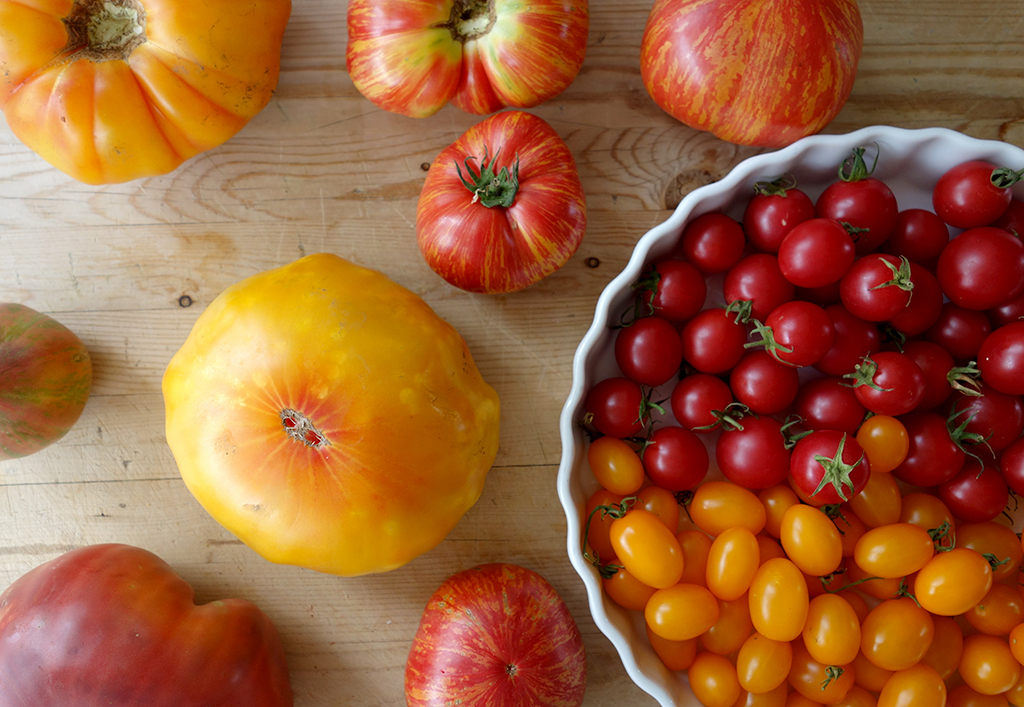 Step 1: Shop
I went to the grocery store the day before to buy polenta, ice cream, salad, drinks, oregano, olives, blue cheese and a 5 lb piece of pork shoulder. I already had basil, blackberries, heavy cream and whole milk on hand. The morning before the party, I walked to farmer’s market for heirloom tomatoes, mushrooms and sweet white nectarines. 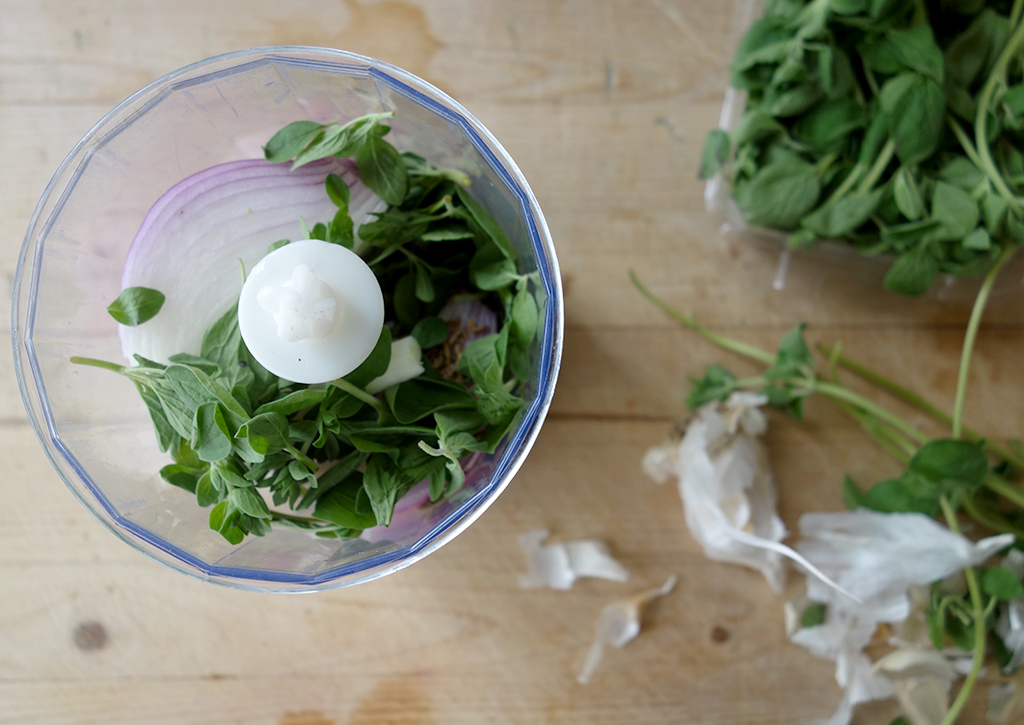 Step 2: Prep
I work from home, so it’s fairly easy to prepare for a party in between calls and meetings. For those who don’t, it would be easy to do most of this the night before. I set the table and made the rub for the pork first thing – using oregano, onion, garlic, cumin and chili powder. The pork needs to cook for at least three hours at a low temperature. The polenta recipe (SO GOOD) also is easy to prepare ahead. You roast the mushrooms in the oven while making polenta on the stovetop. 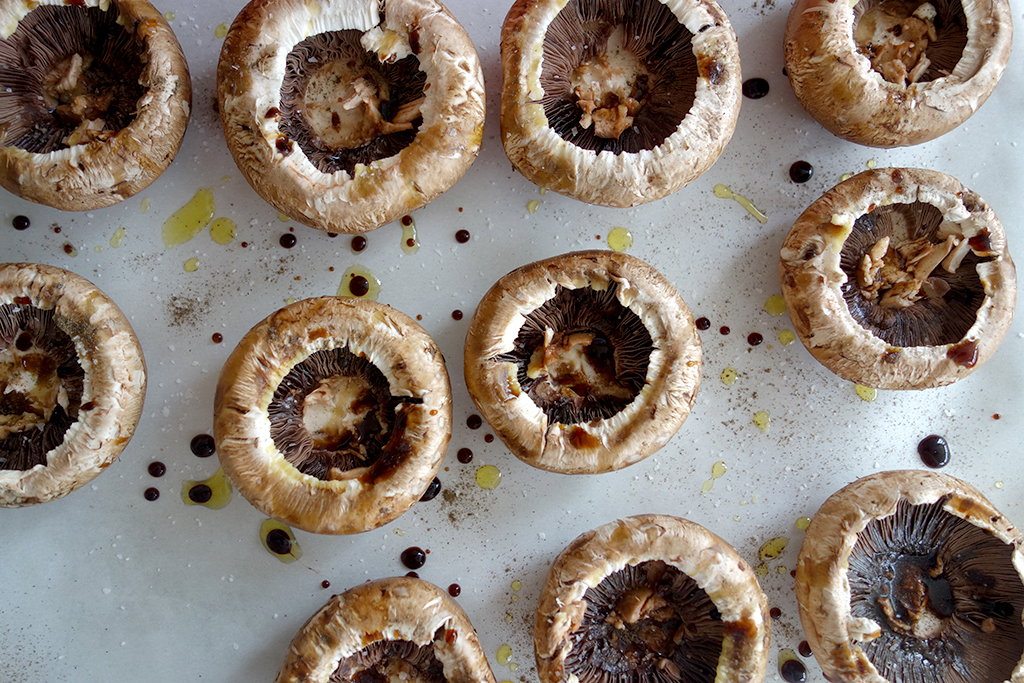 I made two of these polenta dishes, topped with blue cheese, before going back to work. 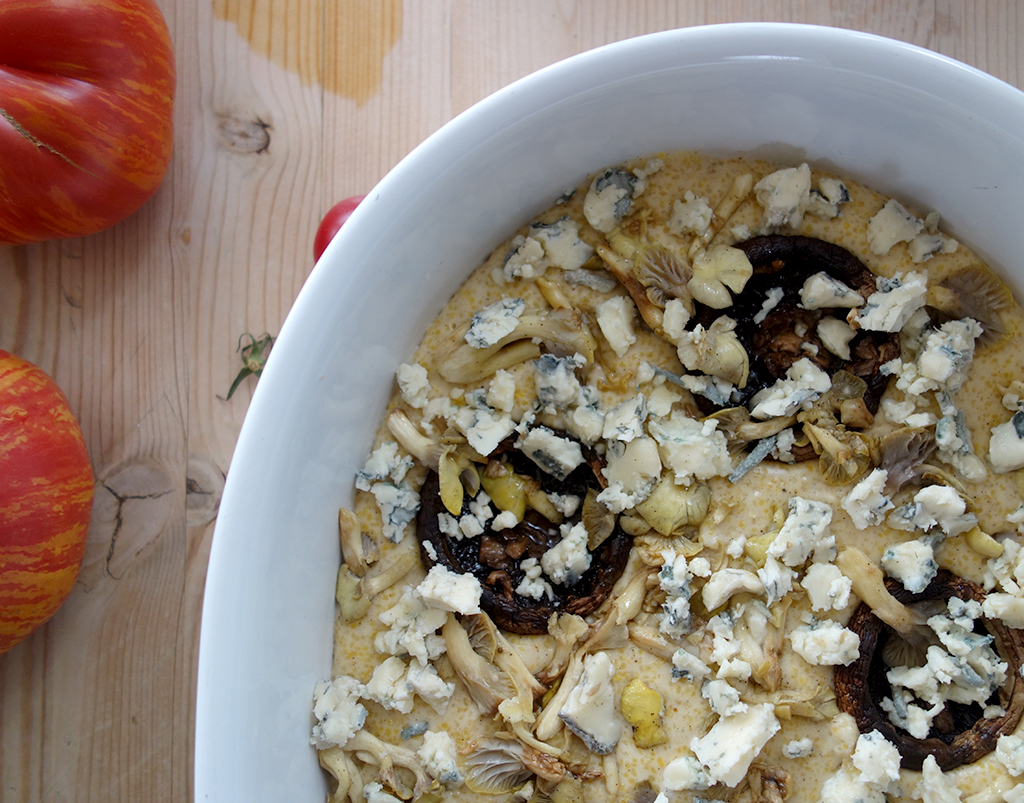 Step 3: Last Minute Prep
Rob helped me clean the kitchen and load the dishwasher. The guests arrived at 5:30 for a bike ride on some of San Francisco’s best trails. Rob led them off into the classic cold summer fog. 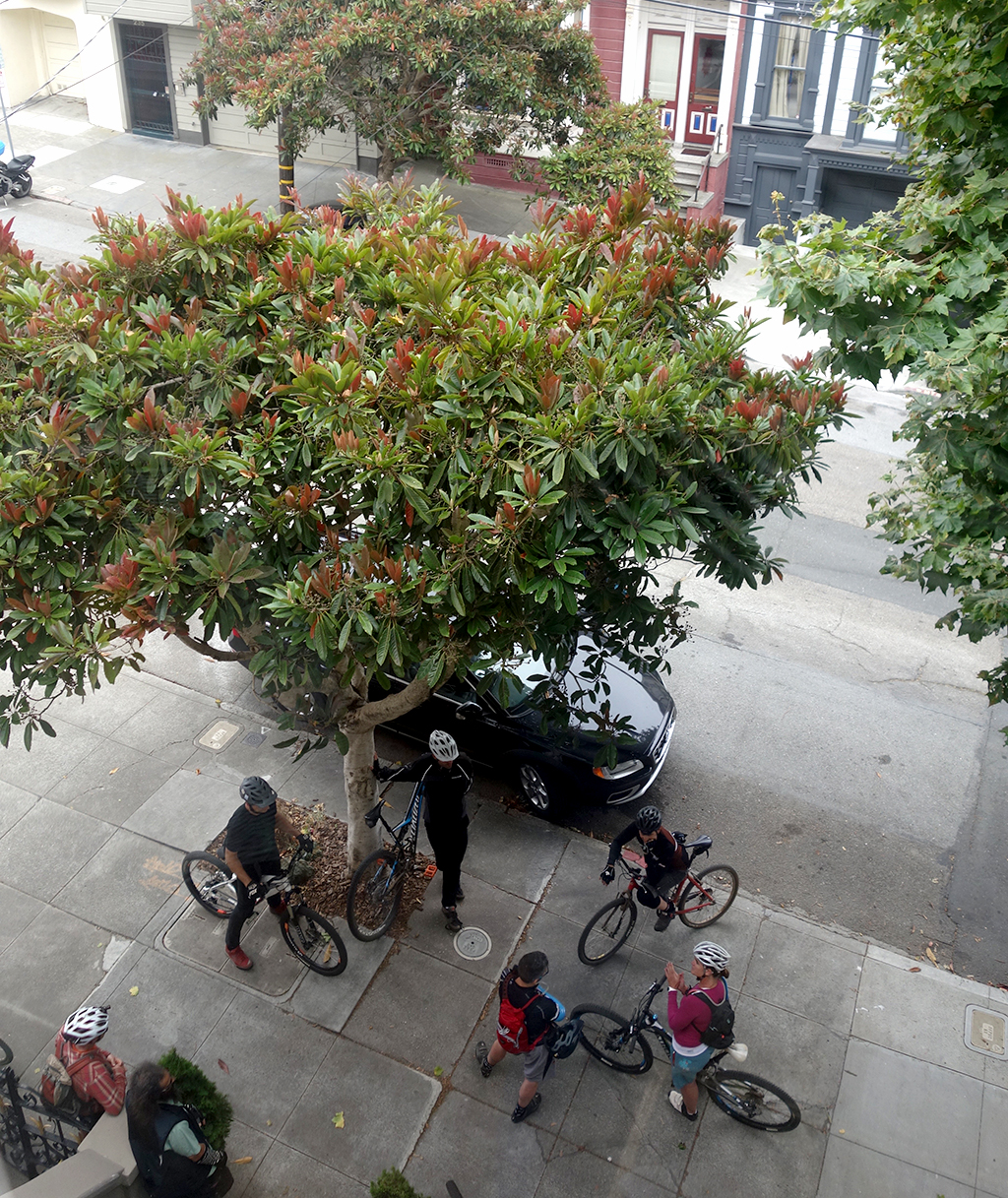 While they were riding, I put the final touches on the buffet. Sliced up a few gorgeous heirloom tomatoes for a huge platter topped with olive oil, balsamic, sea salt and basil. Cut the walnut bread to prepare for the oven, made vinaigrette and put olives in to small bowls. I was done early, and had time to catch up on work (and YouTube videos) before everyone returned from the ride. 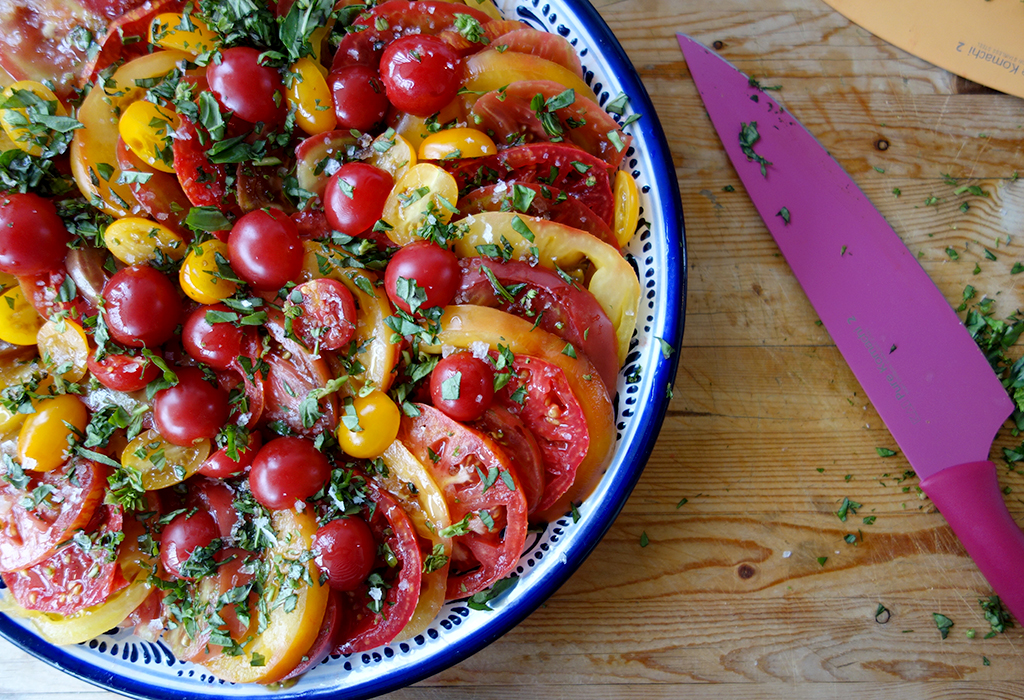 Step 4: Party!
The riders returned and dug in to pickles, olives and beer in the living room. Poor Chava, in purple, was feeling a bit under the weather and opted for tea instead. The pork shoulder came out of the oven to rest and the polenta went in for it’s final 20 minute bake before dinner. I made green salad, warmed the bread in the oven and carved the pork shoulder. All the food was ready and smelling fantastic, so everyone was invited to the kitchen to fill a plate. 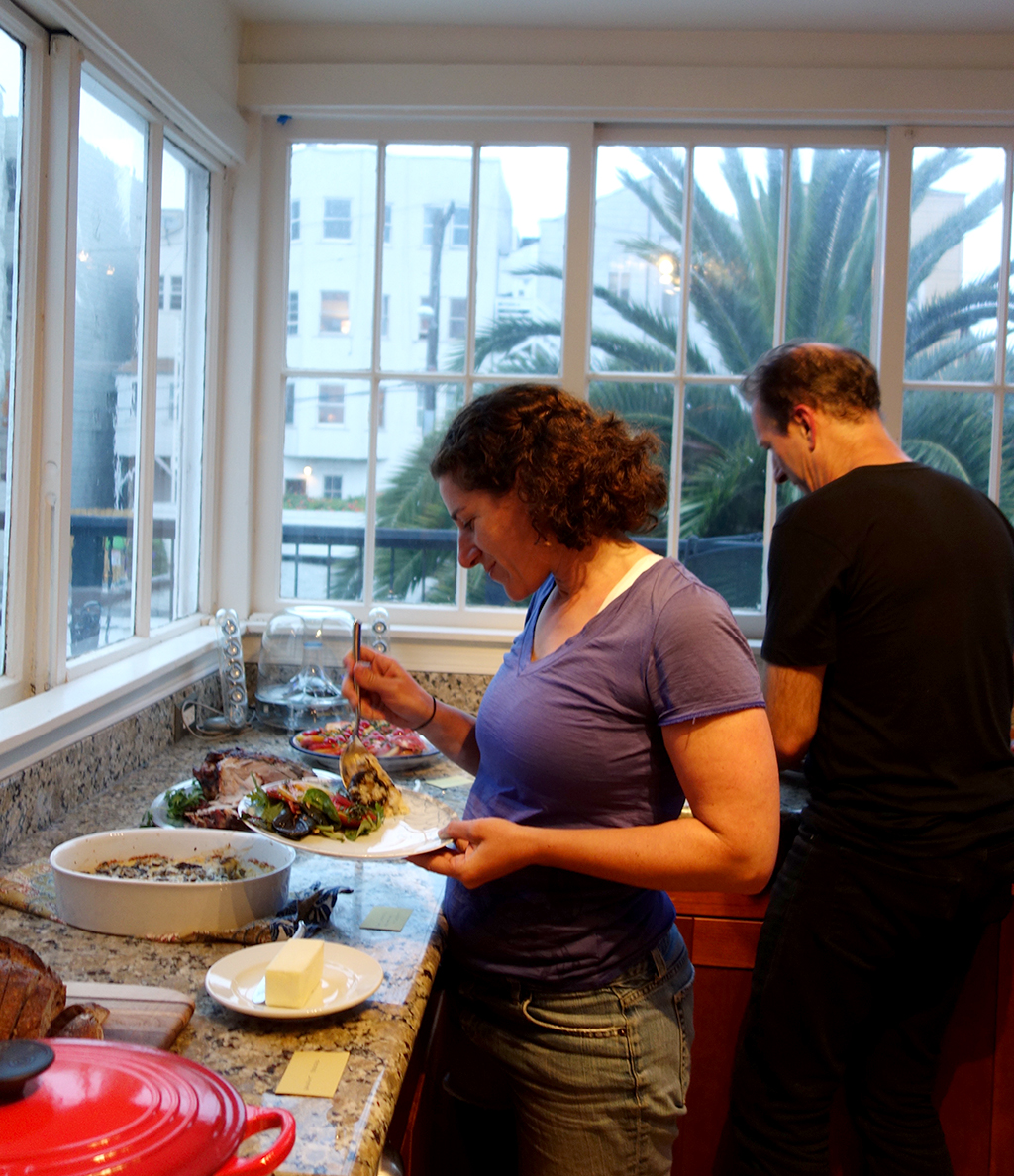 The plates looked so pretty loaded with tomatoes, salad, bread, polenta and pork. 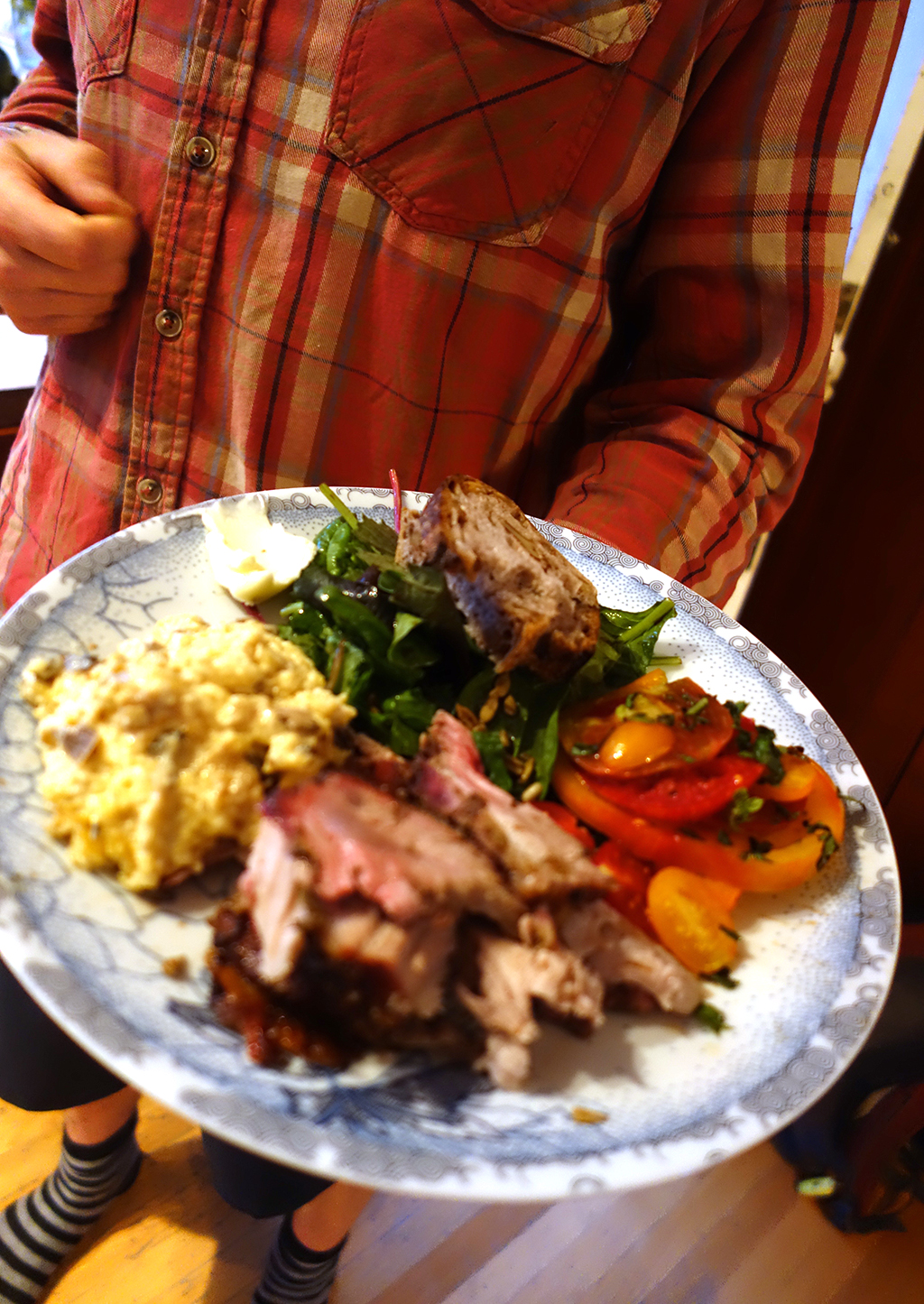 This polenta recipe from Ina Garten is my new favorite vegetarian dish – really easy and very decadent tasting. Bittman’s recipe for the pork shoulder was okay – but a little dry. I think the cut of pork Whole Foods gave me was a bit strange, so maybe that had something to do with it. And, yes, we did drink beer from cans while using my wedding china and sterling flatware! Rob helped me serve up plates of ice cream, cookies, nectarines and blackberries for dessert. 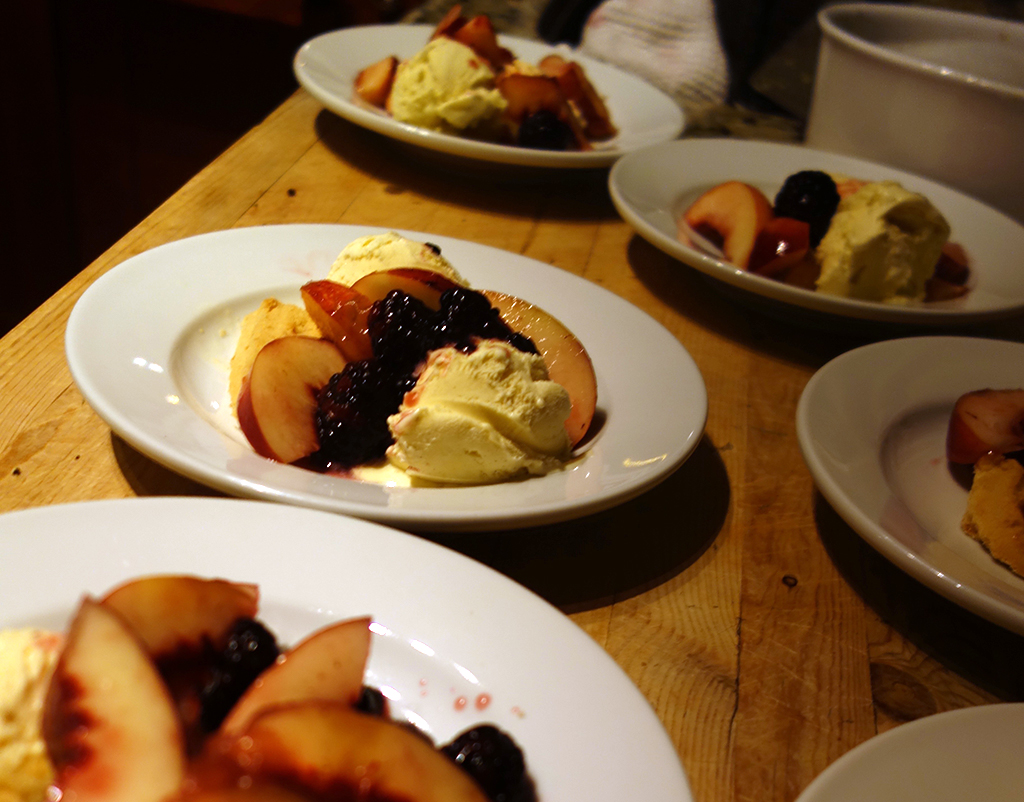 Step 5: Clean up
Because we had prepared all the food in advance and already run the dishwasher, there were only a few dishes to do after the dinner party ended. Rob and I always wash and dry the silver first, and load the dishwasher, before the leaving the rest for the morning. I turned off the lights to go to bed, forgetting the candles were still lit. I love a quite room after a successful dinner party! 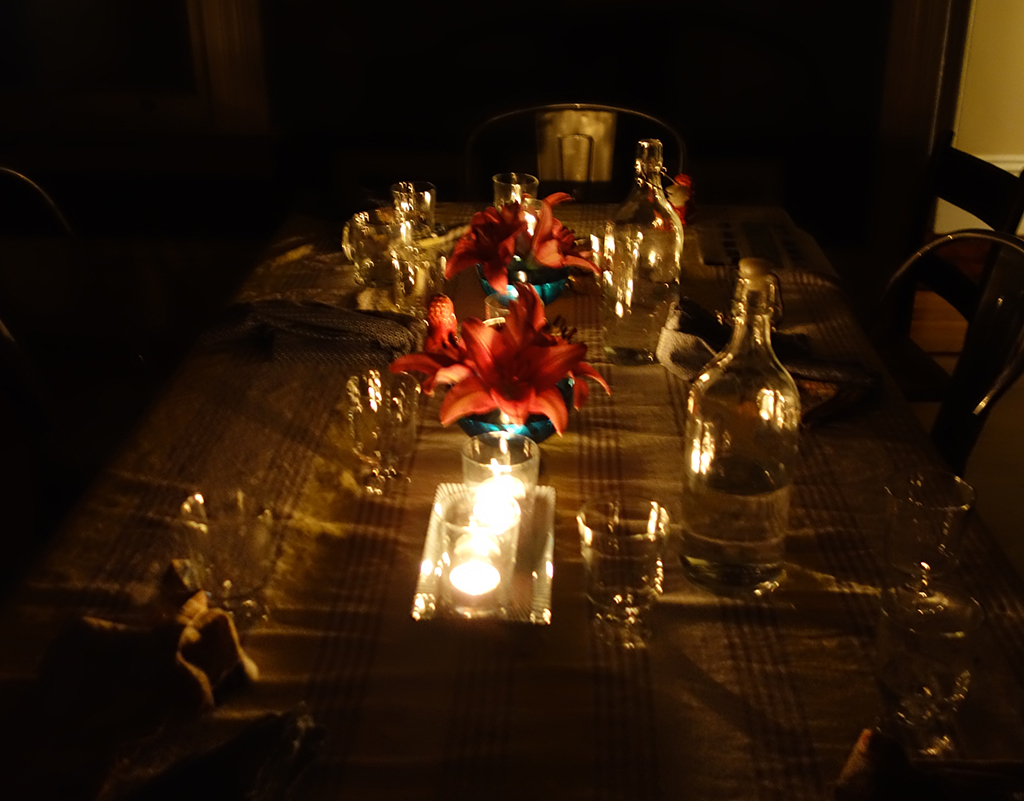 A Gala at the Palace of Fine Arts: Party for the Parks 2015
I love a good gala! Sadly I've been going to… 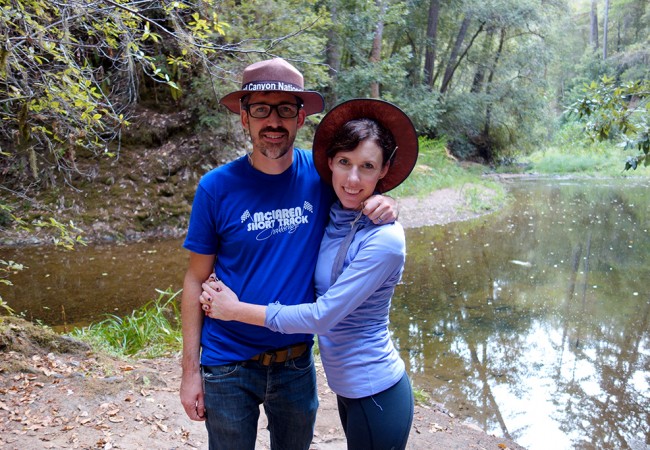