What a joy this first month has been! Our original plan for the first few weeks home with you was a very modern determination to just hibernate, order takeout and avoid people. Instead, thanks to our complicated labor, we were showered with an endless stream of well-wishers bringing food and help. It was HEAVEN. Me in comfy pajamas and robes taking lots of naps and snuggling with you while friends brought delicious food over as many as three times a day. 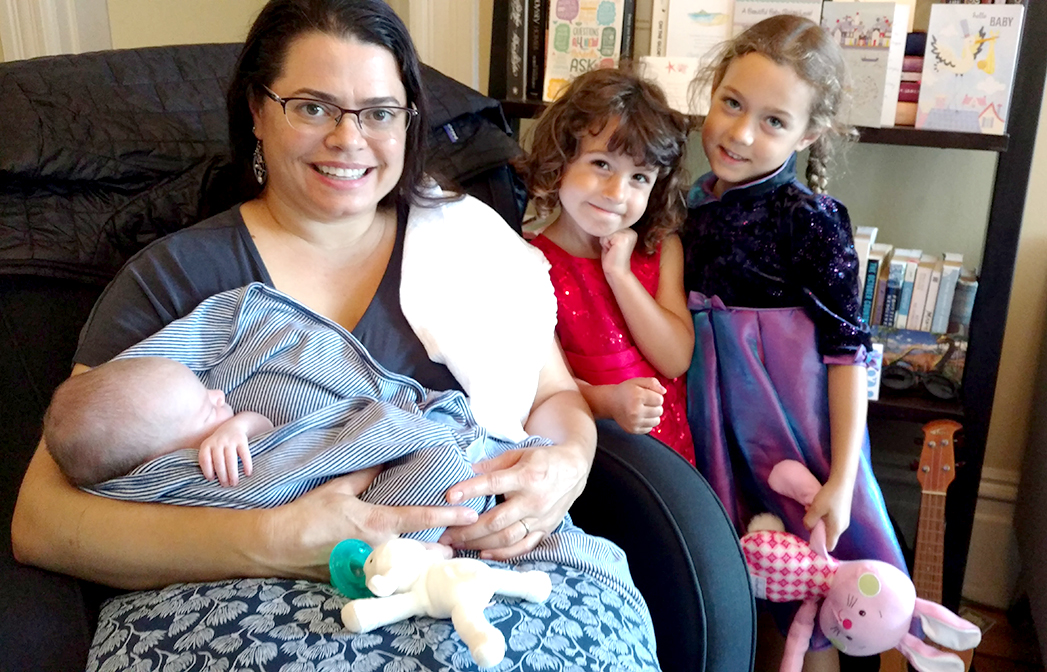 Your darling father made sure we used my favorite silver trays, candles and cloth napkins for these first parties. 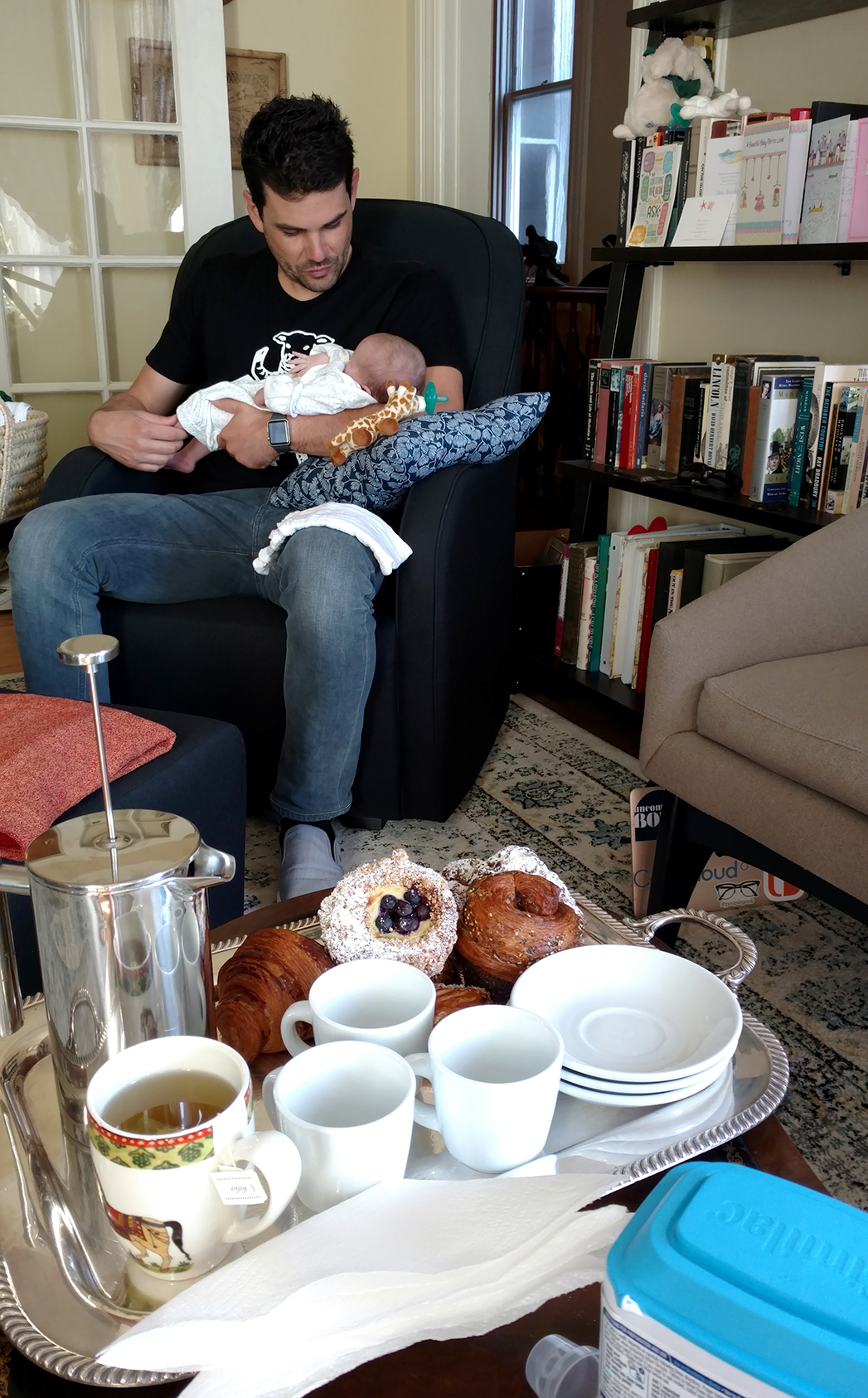 All the food was so delicious. Pastries, cakes, soups, hearty dinners and healthy lunches. 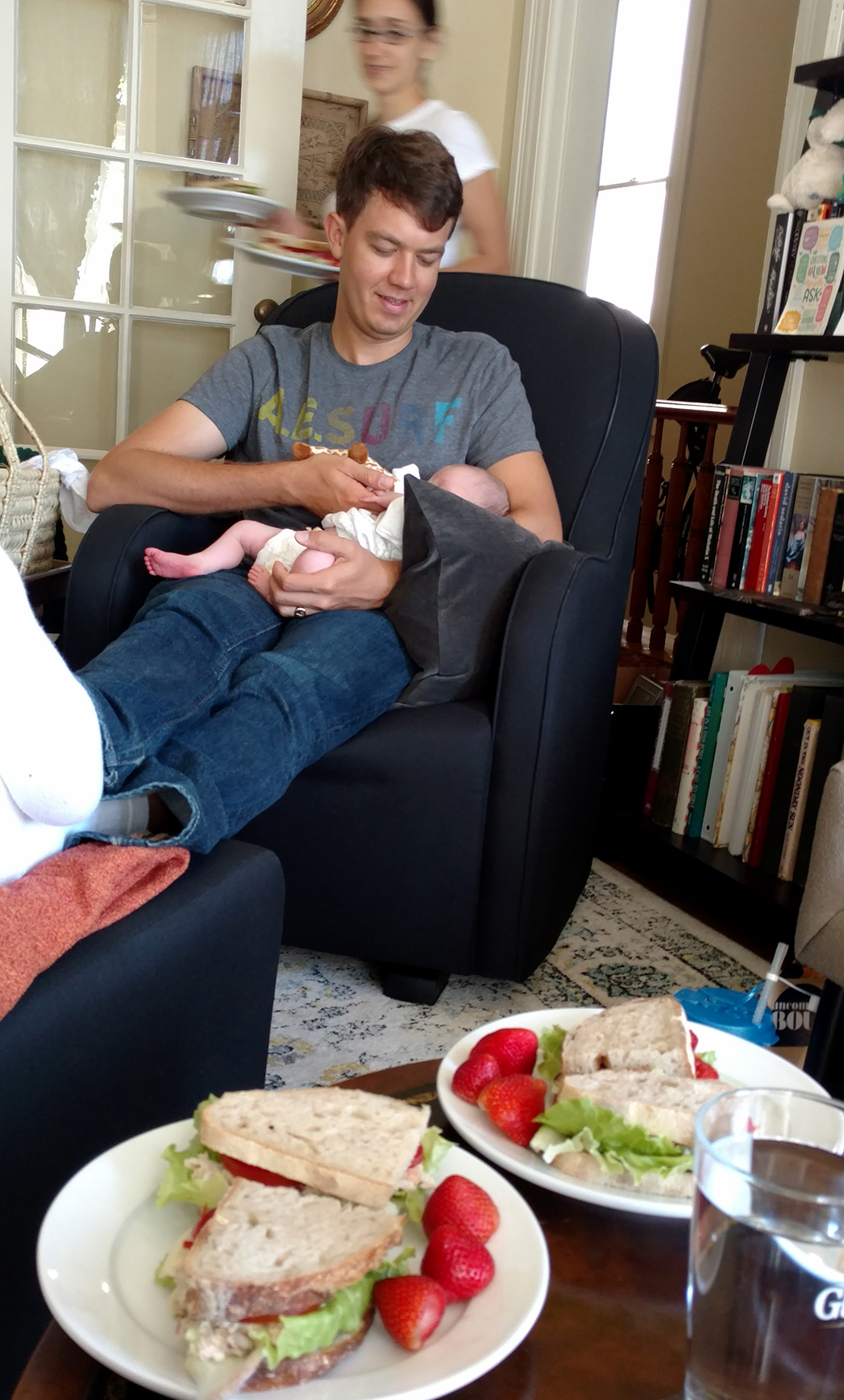 You are a lucky, lucky girl to have so many people vying to be your favorite aunts and uncles already. Greg and Kevin threw your first birthday party one week in and are coming nearly every week to snuggle with you. Margaret comes every Friday after work for her cuddle time. 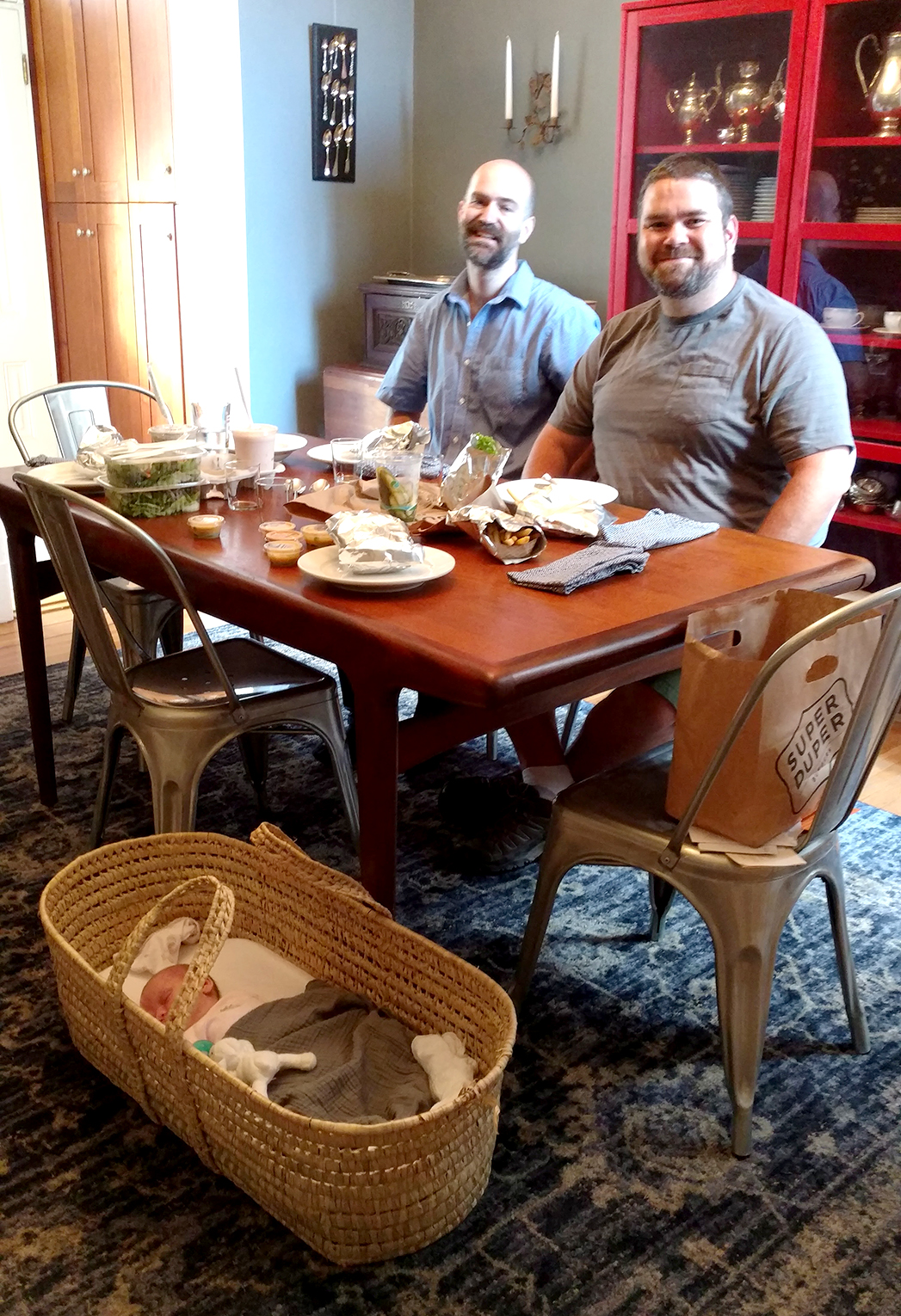 You met your grandfather, Uncle Joe and Yvette for the first time. Your cousins think you are pretty cute too and we see them every week at least. Ev decided that we are good enough parents to take on one of his imaginary babies, named Stinky Stinks. He has reportedly already learned to read under our tutelage and will try walking next. 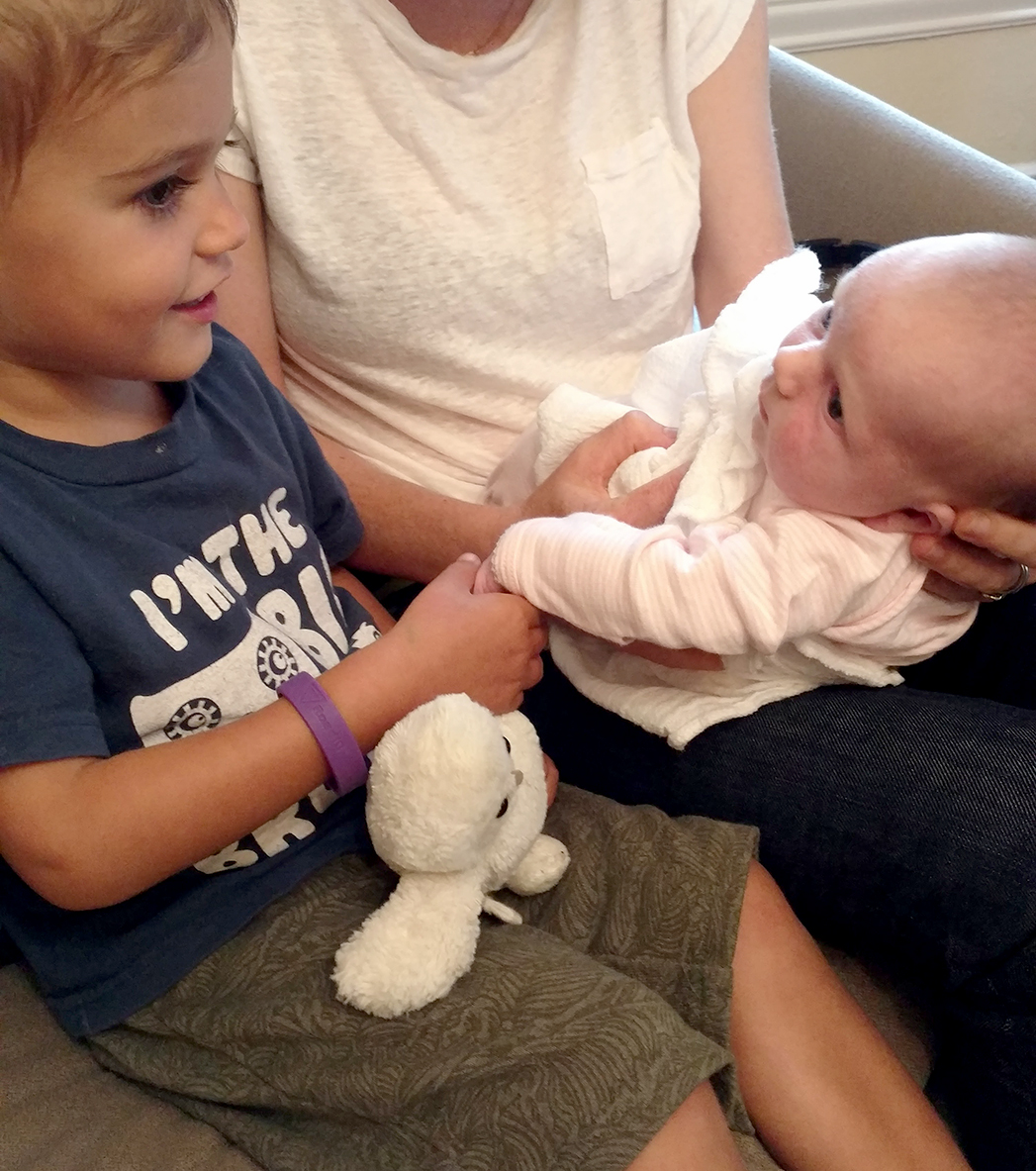 You are such an easy baby. You love eating – drinking down bottles 4 to 5 ounces at a time. And best of all, you are a determined sleeper. We couldn’t believe how well you slept those first few nights taking care of you without help. Your father and I were prepared for a long night “battle” – but instead found ourselves eating Chinese leftovers in bed in the middle of the night and wondering when you might wake up. You have been consistent with sleeping from about nine at night to around three morning and then back down until the late morning. It’s nearly ten right now and you’re still snoozing from your breakfast earlier. Your father feeds you at night while I pump and you’re just the cutest pair ever. He has a special burp song he sings you (burping is not your favorite thing). 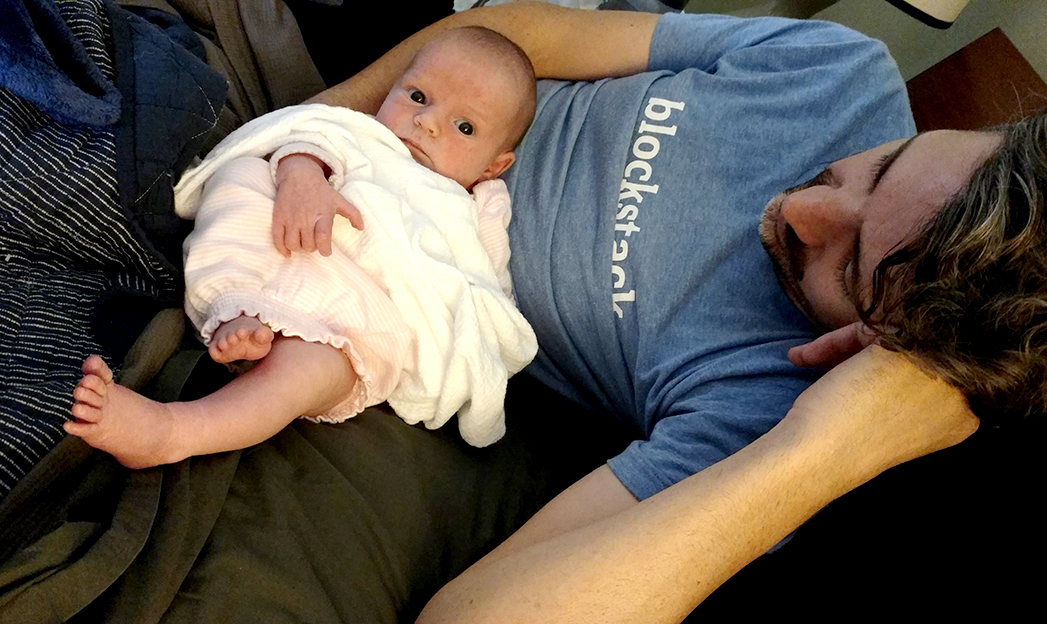 You also love baths – both in the sink and with me in the tub. The warm water makes you take on a “regal” quality, like a tiny Queen of Sheba. 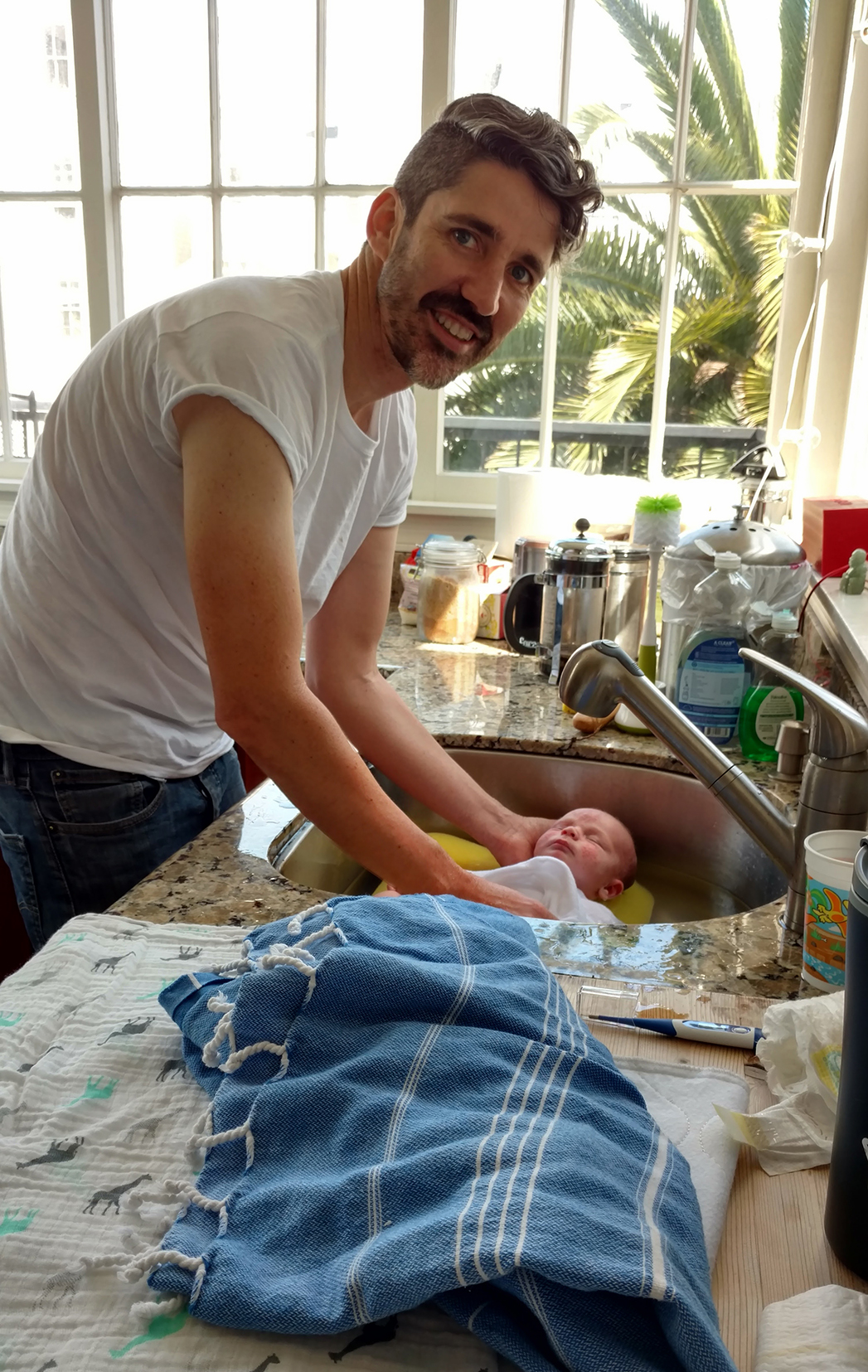 During the day, you’re very alert and curious. Starting during your third week, I was strong enough to take you for walks in the pram with Rob’s help, and then in the fourth week to go on walks on our own around the neighborhood – usually with a stop for ice cream. It’s summer in San Francisco, so we bundle up. Your father is such a pro. I didn’t change a single diaper until a couple days after we got home from the hospital. He takes great care of you and makes sure we’re splitting the work fairly. He gets breaks to go to community advocacy meetings and bike races. I get breaks for pedicures and trips to the hair salon. Spinning on his bike trainer set-up in the living room has been a big stress reliever for him. As for me, I’m doing better every week. I spend a little more time in clothes every day – but still mostly am in pajamas. I’ve been working on pumping to try to catch up with your voracious appetite. It remains to be seen if you’ll ever switch from your beloved bottles to go “straight to the source.” We do a LOT of washing bottles and pump parts. 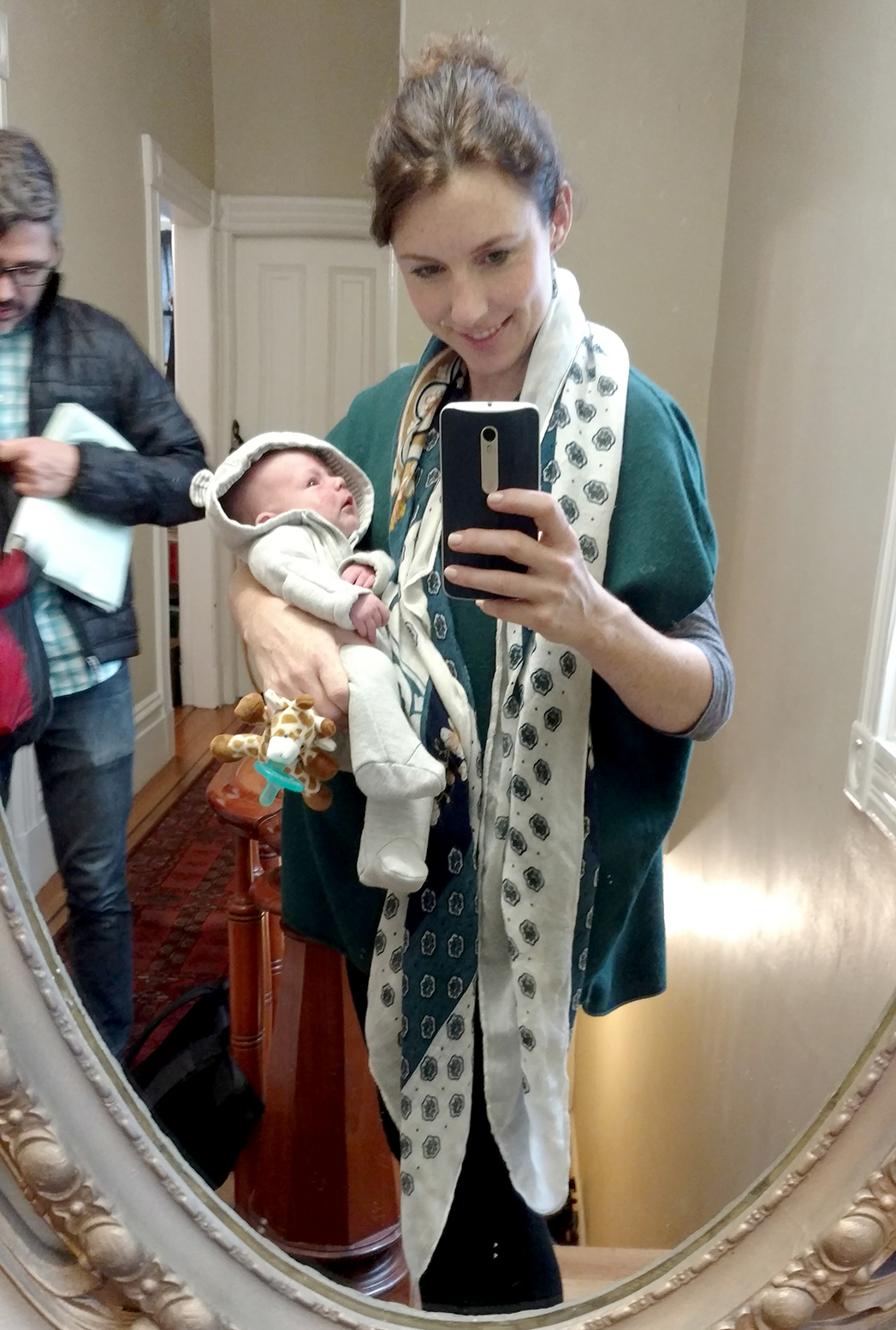 I was prescribed twice daily baths by the doctor in week three and love that. Doctor reports I’m healing quickly. It is amazing how fast my body is bouncing back from pregnancy and labor. What else? You’re nearly ten pounds already. We took you to get your passport photo taken this month. 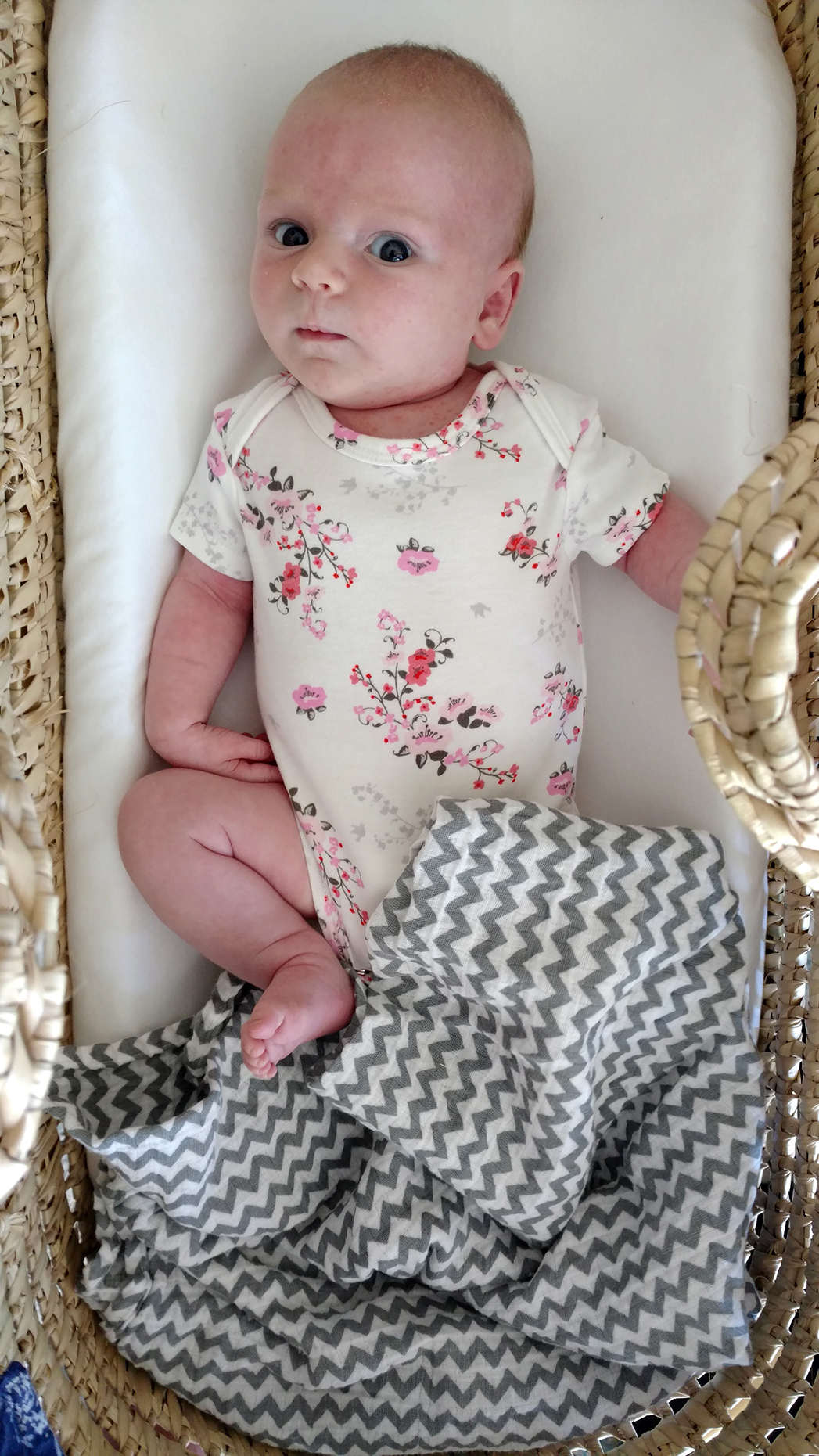 You love chandeliers and looking out the window when the wind is in the plane tree outside. You sat in a bouncy chair for this first time this week. 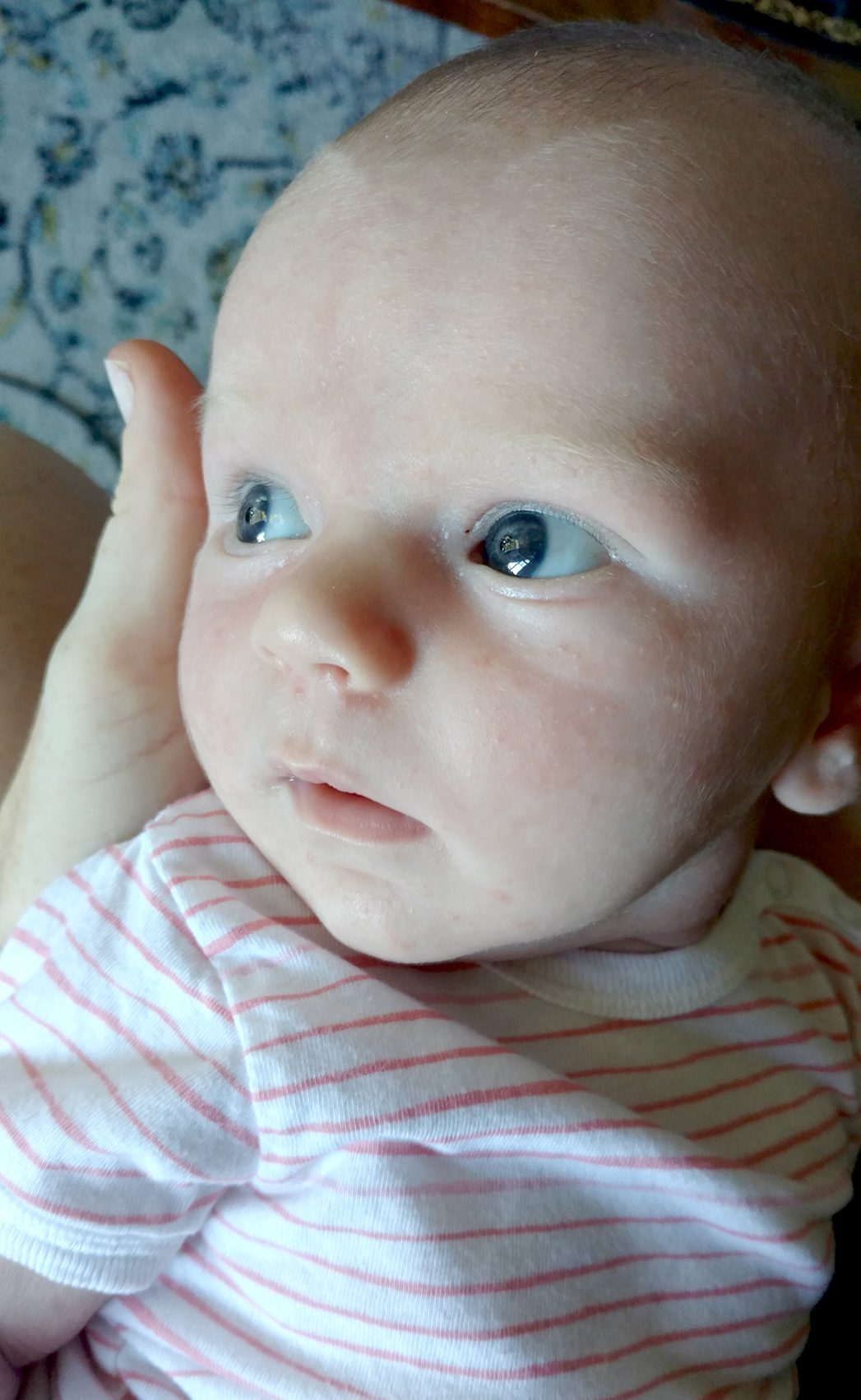 You have an adorable smile with dimples that is elusive to catch. Mostly – you smile at the wall when no one is looking. We call you “Lucy the Baby” and there’s a special song that goes along with that. We think we’ll keep you. 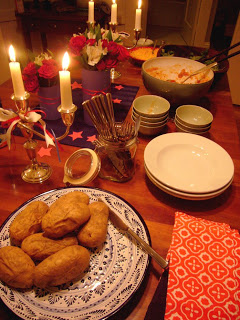 Inauguration Party
Last night was a lot of fun! Eight of us… A Gluten-Free Toddler Tea Party for Valentine’s Day
Your first tea party! What a fun occasion and what…